50 Years Ago This Week: The Middle East in Turmoil

As the reverberations of the Six-Day War continued to be felt throughout the Middle East and the world, TIME devoted this week’s cover story to Jordan’s King Hussein, who was painted as the voice of moderation in the region at a time when such a voice was hard to find.

As other leaders of the Arab nations that had been defeated by Israel searched for someone to blame, Hussein looked inward, admitting that “we have not yet learned well enough how to use the weapons of modern warfare.” Another aspect of this story was explored in this week’s TIME Essay, which took a broader look at the Middle East after the brief war.

Viewed from the distance of a half-century, the stories are likely to strike many modern readers as retrograde and oversimplified, frequently resorting to generalizations about the national characteristics of Middle Eastern people. Aspects, however, remain useful as a primer on the history of the region.

For example, from the essay:

The latest from Vietnam: “We are winning, slowly but steadily,” promised Gen. William Westmoreland — even as TIME admitted that the war was “not going entirely according to the U.S. scenario for 1967.” The guerrilla tactics of North Vietnam showed no sign of letting up, and the willingness of its leaders to fight a war of attrition was so high, that one defector told the U.S. that his whole job for the North Vietnamese forces had been to dig enough graves for the third of all fighters who were expected to die in every clash with the Marines.

Private acts: Britain’s parliament had revised the nation’s laws and as a result, as TIME explained, “For the first time since the era of Henry VIII, private homosexual acts between consenting males over 21 will not be subject to criminal prosecution.” Though the law wasn’t exactly accompanied by what would be seen as open-mindedness today — being gay was still portrayed as a “disability” — it would eliminate many gay men’s fear of blackmail.

Carry-on baggage: Looking for a way to get around airline restrictions on carry-on baggage? It’s still probably not wise to try this 1967 method pioneered amid a rising concern about lost baggage: “A Florida insurance man who travels frequently by air has a novel way of keeping close to his large suitcase. He arrives at the airport with the bag manacled to his wrist. ‘Cape Kennedy courier—top security’ he whispers to the gate attendant, whereupon man and luggage emplane, hand in handle.”

Great vintage ad: In making an argument about why placing an ad in LIFE Magazine (a sister publication to TIME) is a good way to reach a whole family, the magazine exposes some very of-that-moment family dynamics, starting with the fact that “you should hear what Daddy says about Mommy’s muumuu.”

Coming up next week: Riots in Newark 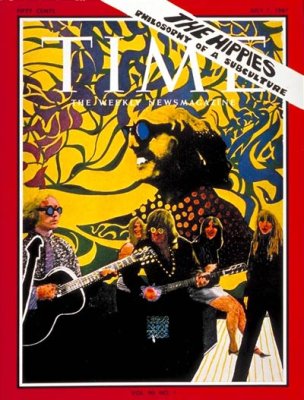 50 Years Ago This Week: When the Hippies Took America
Next Up: Editor's Pick