The White House warning to Syrian President Bashar Assad on Monday that he would “pay a heavy price” for a new chemical attack lays out a test of President Donald Trump’s own still-developing policy on the crisis in Syria, where as many as a half million people have died since 2011. Since April, Trump’s administration has dramatically shifted the U.S. approach to the Assad regime, taking a confrontational stance that threatens to remake the contours of Syria’s six-year-old civil war. The White House’s threat of further hostilities — citing “potential” evidence of preparations of a new chemical attack — raises the possibility of a widening conflict with the Syrian regime or its Russian and Iranian allies.

“What the U.S. is intending to do with this statement is remind the Assad regime of the new posture of the United States under president Trump,” said Lina Khatib, the head of the Middle East and North Africa program at Chatham House in London. “It’s more about U.S. posturing than a change in U.S. policy toward Syria,” she added in a phone interview with TIME.

On April 6, Trump ordered a cruise missile strike on a Syrian military airbase in response to a sarin attack that killed more than 70 people, including civilians, in Syria’s Idlib province. The strike ended six years in which the U.S. avoided direct conflict with Assad, even while it supported elements of the armed insurrection against him in the aftermath of the popular uprisings that consumed Arab states in 2011.

Since the missile strike, U.S. forces have struck pro-Assad forces four times, culminating a week ago when an American fighter jet shot down a Syrian bomber after it attacked American-allied militias on the ground in eastern Syria. It was the first time the U.S. military shot down a foreign jet in more than a decade, marking a sharp escalation in hostilities with Assad. The strike infuriated Russia, whose military threatened to track American aircraft as targets in the skies over the western part of Syria. With its statement on Monday, the Trump appeared to raise the stakes off the standoff setting up a test of the deterrent capability of its strikes on Assad’s forces.

“Limited punitive strikes and strong public statements are not enough to deter a regime that has killed hundreds of thousands of its own people, and they remain insufficient to ward off Russia and Iran, which have more to gain and lose in Syria than the United States,” writes Charles Lister, a senior fellow at the Middle East Institute in Washington on Tuesday.

Trump’s administration has also deepened U.S. involvement in the land war in Syria, where American troops are supporting a Kurdish-majority militia force battling the Islamic state. The militias, known as the Syrian Democratic Forces, are now advancing into the city of Raqqa, ISIS’ de facto capital. As a result, the U.S. is now vying with rival powers, including the Assad regime, for control of land in eastern Syria seized from ISIS. Pro-Assad troops reached the Syrian-Iraqi border earlier in June, blocking the advances of another American-backed proxy force on the ground.

Analysts said the White House statement could be intended to send a message to Assad, Russia, and Iran about U.S. intentions in the strategic context in Syria’s east, but the statement caught officials at the Pentagon and the State Department by surprise, according to several news reports. The statement made no reference to the sources of any intelligence it may have been based on.

Nearly a day after the White House’s declaration, there was no response from the Assad government. In Moscow, the head of the international affairs committee in the upper house of Russia’s parliament, Konstantin Kosachev, called the White House’s statement “frightening.” According to Russia’s TASS news agency, he said, “America could also be preparing its own preemptive strike against Syrian troops.”

The Assad regime’s use of chemical weapons produced agony for Syrian civilians since the early days of the conflict. Former President Barack Obama first warned Assad in 2012 that the use of such arms would represent a “red line” that would change the American strategic calculus with regard to Syria. In August 2013 a chemical attack blamed on the regime killed more than a thousand people in Eastern Ghouta, a district on the outskirts of Damascus. The Obama administration threatened to strike Assad’s forces, then backed down after the U.S. and Russia brokered a deal to remove the regime’s chemical stockpile.

The 2013 agreement removed nearly 1,300 tons of chemicals from Syria, but failed to eliminate Assad’s entire stockpile. Chemical attacks continued as a part of the regime’s assault on sections of the country controlled by rebel groups. According to the Syrian-American Medical Society, a leading humanitarian aid group, the government carried out at least 161 chemical attacks from the start of the conflict through 2015. Those attacks appeared to be part of a strategy to demoralize the civilian population of areas controlled by the armed opposition.

In many of those attacks, government troops used chlorine, an industrial chemical first used as a weapon by the German military in the first World War. The use of chlorine, as opposed to sarin, creates another complication for the Trump administration’s evolving policy. A chlorine attack reported in northern Syria a day after the cruise missile strikes resulted in no military action.

Syrian opposition activists have long called on the United States to impose a “no fly zone” over rebel-held areas of Syria in order to stop indiscriminate attacks on civilians. Airstrikes by Assad’s forces and its Russian supporters have devastated entire cities, including Aleppo, where rebels and civilians were forced to flee in December 2016. Supporters of the Syrian opposition were skeptical in response to the White House’s statement.

“I would understand the message in another way. You can use all weapons to take lands but not chemical,” said Abdulkafi al-Hamdo, an English teacher from Aleppo who was displaced from the city in December, in a WhatsApp message to journalists.

In a sign of the continuing toll of the American-led air war against ISIS, Syrian activists reported on Tuesday that a coalition airstrike on an Islamic State prison in eastern Syria killed nearly 60 people. Reports of civilian casualties in the U.S.-led air campaign have surged in recent months, killing more than a thousand people in March alone, according to the London-based monitoring group Airwars. 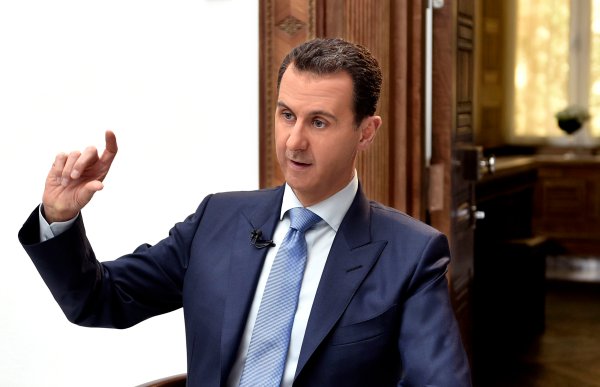 A U.S. Warplane Shot Down a Syrian Jet. Here's Why That's a Big Deal
Next Up: Editor's Pick