Can Mitch McConnell Save the Republican Health Care Bill?

One of Washington’s unwritten rules is this simple maxim: never underestimate Mitch McConnell.

Yet even the Senate Republican leader, regarded by both parties as one of Capitol Hill’s craftiest tacticians, proved unable to steer a wildly unpopular health care bill through the Senate this week on his own crushing timetable. Facing resistance from moderates and conservatives in the GOP conference, not to mention an outcry from powerful outside groups ranging from medical associations to the Koch brothers, McConnell announced that he would delay the vote until after the July 4 recess.

“Legislation of this complexity almost always takes longer than anyone else would hope,” the Kentuckian told reporters in the Capitol on Tuesday afternoon. “We’re still working toward getting at least 50 people in a comfortable place.”

McConnell’s daunting challenge was compounded on Monday by a report from the nonpartisan Congressional Budget Office. It estimated the Senate’s bill, while saving the federal government some $321 billion over the next decade, would also swell the ranks of the uninsured by 22 million people and result in about 15 million losing Medicaid coverage. Even as McConnell vowed to hold a final vote before the Senate skipped town this week, allies urged him to take his foot off the gas. Plowing ahead in the face of colleagues’ opposition “would be a mistake,” said Ron Johnson of Wisconsin, one of several Republican senators to criticize the bill. “If Leader McConnell says failure is not an option, don’t set yourself up for failure.”

With 52 Republicans in the Senate and no Democratic support, McConnell had room for only two defections. (Under budgeting rules, the bill requires 50 votes for passage, with Vice President Mike Pence breaking the tie.) At least five Republicans signaled they would oppose a motion to bring the bill to the floor. “It’s a terrible bill,” Republican Sen. Rand Paul, McConnell’s Kentucky colleague, told reporters on Monday night. “It’s worse to pass a bad bill than pass no bill.”

Despite the setback, Republicans and Democrats alike say it would be foolish to count McConnell out. The Senate bill, drafted in private by a small group of Republicans, is an opening bid, not a finished product. Now the process moves to the bartering stage. And McConnell has some $188 billion—the amount of additional cash the Senate can spend before running afoul of budgeting rules—with which to sweeten the deal.

Already, the bill was being written with an eye toward winning the votes of recalcitrant Republicans. For example: one way the draft legislation would slash Medicaid spending is by transferring funds from states that spend lots of money per Medicaid enrollee to more parsimonious states. But it carves out a special exception for sparsely populated states—including Alaska, whose Republican senator, Lisa Murkowski, has expressed reservations about the plan.

More side deals may now be in the offing. Moderate Republicans who represent swaths of Appalachia, like West Virginia Sen. Shelley Moore Capito and Ohio’s Rob Portman, are seeking more federal dollars to help combat the opioid crisis ravaging their states. The pair had sought some $45 billion for the project over the next decade; so far the Senate bill allots $2 billion.

The bill’s conservative critics have different concerns. Small-government Republicans like Utah’s Mike Lee and Ted Cruz of Texas, who have said they aren’t ready to support the bill, might be swayed by free-market initiatives like health-savings accounts. “There are a host of tools we can use,” Cruz said Monday, “that would have a significant impact on premiums.”

All this horse trading is a familiar, if unsavory, component of threading major legislation through Congress. To attract the necessary votes to pass Obamacare, Democrats tucked in state-specific giveaways to senators and made costly concessions to the insurance and pharmaceutical lobbies. Those moves drew Republican ire. Some GOP senators who are prepared to swallow McConnell’s bill warn they might bolt if a similar process unfolds now.

Getting the Affordable Care Act passed and sign took Obama and his allies 15 months, as McConnell alluded to in his press conference Tuesday. The GOP leader is trying to repeat the feat in an relative eye blink. “We’ve got a lot of discussions going on,” McConnell insisted, “and we’re still optimistic we’re going to get there.”

He has defied precedent before. It was McConnell who orchestrated his party’s blanket obstruction to Barack Obama’s agenda, McConnell who devised the plan to deny a vote to Supreme Court nominee Merrick Garland, and McConnell who steered the GOP back to the majority despite its dismal brand. As his allies laud and opponents lament, he is as effective as he is ruthless.

So if the forces of Washington seem arrayed against him—not to mention the sheer complexity of a bill that would upend one-sixth of the U.S. economy—Republicans are taking solace from that ironclad Washington adage. “I would not bet against Mitch McConnell,” House Speaker Paul Ryan insisted Tuesday. He will find out soon if his colleagues still agree.

With reporting by Philip Elliott and Emma Talkoff/Washington. 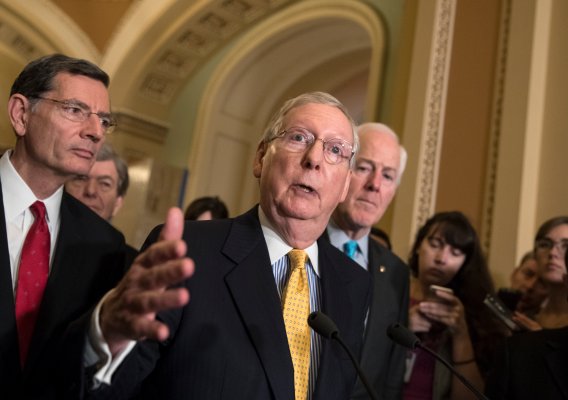 Senate Delays Health Care Vote Due to Lack of Support
Next Up: Editor's Pick