The Myanmar Military Has Detained Three Journalists for 'Unlawful Association'

TNLA in a military camp in Shan State, Myanmar in 2014.
Thierry Falise—LightRocket/Getty Images
By Joseph Hincks

The Irrawaddy reports that the men were arrested on suspicion of liaising with members of an ethnic rebel armed group, the Ta’ang National Liberation Army (TNLA), likely under a vague, junta-era “unlawful association” law often used to suppress dissent. A senior reporter for the news website was among those detained.

A statement posted by the commander-in-chief’s Facebook page said the group was detained Monday after observing a drug burning event organized by the TNLA, which is one of more than 20 non-state groups fighting the government. The Myanmar government had organized similar events elsewhere to mark the U.N.’s International Day Against Drug Abuse and Illicit Trafficking, according to the Associated Press.

The commander’s statement said the three reporters — Lawi Weng of the Irrawaddy, Aye Nai and Pyae Phone Naing of the broadcaster Democratic Voice of Burma (DVB) — and four other unidentified detainees were accused of “connection to the TNLA terrorist group” and had been handed over to police for further questioning and possible arraignment, AP reports.

Read More: Aung San Suu Kyi Had a Plan to Bring Peace to Myanmar. But Convincing Others Hasn’t Been So Easy

Myanmar was ruled by a brutal dictatorship until 2011, when it began a transition to civilian rule. The country is home to one of the world’s longest and most complex civil wars, and it’s fragile peace process is faltering. Despite the lifting of state censorship in 2012, Myanmar’s nascent national media is still subject to tight restrictions, dangerous environments and repressive laws.

In a statement issued soon after their detention, Amnesty International called for the journalists’ immediate release. “Their arrests send a chilling message to Myanmar’s already embattled media,” James Gomez, Amnesty’s Director for Southeast Asia and the Pacific said.

“It is the nature of the work of journalists to go and cover news and stories,” DVB’s Rangoon bureau chief Toe Zaw Latt told the AP. “They are not violating any laws.” 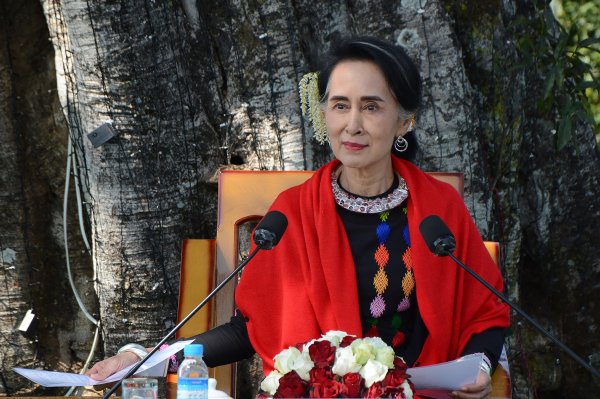 In Aung San Suu Kyi's Myanmar, Peace Is Becoming an Elusive Dream
Next Up: Editor's Pick