Alaska Airlines is planning to charter a flight to allow space enthusiasts to watch “The Great American Eclipse” from the sky on Aug. 21, the company announced Monday.

The rare event will mark the first total solar eclipse to be visible coast-to-coast in America since 1918. The eclipse, during which the moon will completely block out the sun, will first be visible on land near Salem, Ore., and will then move diagonally across the country toward Columbia, S.C.

The Alaska Airlines flight — set to depart Portland at 7:30 a.m. P.T. on Aug. 21 — will be filled with invitation-only passengers, but a contest beginning July 21 on social media will give away seats on the flight to one person and their guest.

“As an airline, we are in a unique position to provide a one-of-a-kind experience for astronomy enthusiasts,” Sangita Woerner, the airline’s vice president of marketing, said in a statement. “Flying high above the Pacific Ocean will not only provide one of the first views, but also one of the best.”

In 2016, Alaska Airlines adjusted the path of a flight from Anchorage to Honolulu to allow passengers to view a solar eclipse over the Pacific Ocean, capturing the spectacle on video. 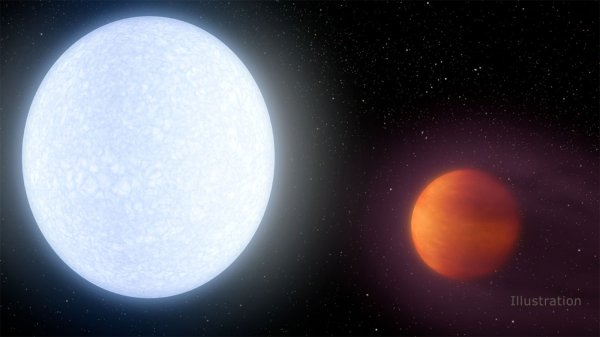 Scientists Discovered a Planet That's as Hot as a Star
Next Up: Editor's Pick