The actor who played Brutus in a recent controversial production of Julius Caesar in New York City explained exactly what happened when protesters rushed the stage.

In an essay penned for Vulture, Corey Stoll, who’s also appeared onscreen in House of Cards and in Ant-Man, described in great detail how the cast and crew dealt with their unexpected controversy.

“After four weeks in the rehearsal room, we moved to the theater and I saw Caesar’s Trump-like costume and wig for the first time,” he noted; apparently the cast was not aware of the particularly political bent the director had chosen. That design choice came to a head during the live outdoor productions in June when protesters began disrupting the Public Theater show, first with verbal disturbances and then by rushing the stage. (One protester burst onto the platform yelling, “Stop the normalization of political violence against the right! This is unacceptable!” before being removed by security.)

“… A beat after I stabbed Caesar and he fell to the floor, I saw a flash of a white shirt, and a woman shouting something I couldn’t understand. Covered in blood and holding a very real knife, I was already in fight-or-flight mode,” he described. “Luckily, our stage manager Buzz Cohen asked for security to escort our visitor out before anyone got hurt… After a brief pause Buzz said, ‘Actors, let’s pick it up from ‘liberty and freedom.’”

After the final show, which also required the intervention of the stage manager, Stoll recalls an emotional experience. “Backstage, I exhaled and sobbed,” he wrote. He also provided some commentary on the role of artists as political activists: “The very act of saying anything more nuanced than ‘us good, them bad’ is under attack, and I’m proud to stand with artists who do. May we continue to stand behind our work, and, when interrupted, pick it right back up from ‘liberty and freedom.’” 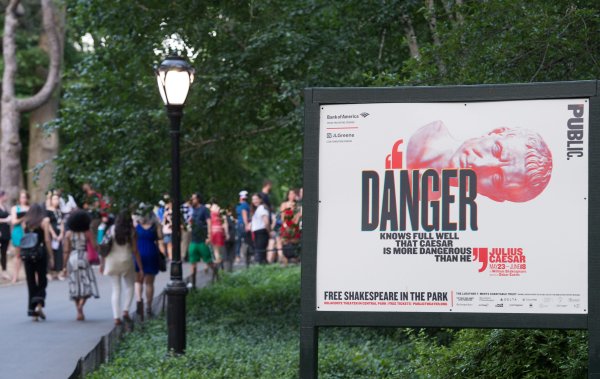 Pro-Trump Protesters Interrupt 'Shakespeare in the Park' Performance of 'Julius Caesar'
Next Up: Editor's Pick