On June 29, Apple celebrates the 10th anniversary of the iPhone, a device all but culturally synonymous with the word smartphone. I was lucky enough to preview one the day before Steve Jobs introduced it at MacWorld in January 2007. Apple senior vice-president of marketing Phil Schiller laid a silver-framed black rectangle on a coffee table, then asked me what I saw.

I told him I saw a piece of glass in a metal case. He told me that’s what Apple wants you to see — in “off” mode, that’s exactly what it is. But turn it on and the magic happens. Apple sees itself as a software company first, and devices like its MacBooks, iPods, iPhones, the Apple TV and Apple Watch as vehicles for those core operating concepts.

Before its release, the hype for an Apple-devised phone was off the scale. It even garnered the nickname the “Jesus phone” — or better still, “jPhone” — as some felt it would be miraculous. At the time, none of us believed it could live up to the hype. To our surprise, the iPhone turned out to be a game-changer, a powerful new technology that went on to impact the lives of hundreds of millions of people around the world, changing the way they communicated, worked, learned and played.

But the most surprising thing about the iPhone is the impact it’s had on five major industries.

The first industry it upended was the PC market, where Apple’s stroke of genius was to put one in your pocket. Until the iPhone shipped, PC sales were around 400 million a year. But as the iPhone and smartphones in general have become critical tools for information, used for productivity, communications and pleasure, the PC has become less important to many people. Until the mobile revolution that came with the iPhone, the only way people could access the Internet was from a PC or laptop.

Today, thanks to the iPhone, iPad and all the Android equivalents inspired by Apple’s ideas, people have many more options to make the connections they need regardless of location. Consequently, the PC industry is now shipping only about 275 to 290 million PCs a year, and this has caused a level of industry consolidation that is now concentrated around Lenovo, HP, Dell, Acer and Apple.

The second industry the iPhone impacted was Telecom companies like AT&T and Verizon. Before the iPhone, most of the original telco business models were around voice. Yes, Voice over IP became popular by 2000 and had already started pushing the telecom companies to move to digital voice instead of traditional landline voice delivery methods. But with the advent of the iPhone, they were effectively forced out of the traditional voice business altogether. Try and find a payphone today, in contrast with the millions of payphones that were in place a decade ago.

Today’s telecom providers are data communications companies whose business models have been completely transformed. All have added things like information and entertainment services, and all have become conduits for multiple types of data services to their customers.

The third industry the iPhone turned on its head was the movie and TV business. For most of my life in order to watch a movie I had to go to a movie theater, and to watch a TV show I had to sit in front of my television at home. The iPhone created a mobile platform for video delivery, and since 2007 every major movie and TV studio has been forced to expand their distribution methods to include downloaded and streaming services to mobile devices. We can thank the millions of iPhones in the field, capable of letting people watch video anytime and anywhere, for prodding these studios to make this so. We can also thank the iPhone for fueling new types of video services like Youtube, Netflix and Hulu — video powerhouses, at least 50% of whose content is viewed on some type of mobile device.

The fourth industry the iPhone impacted has been the gaming industry. Before 2007, most games were either delivered by way of game consoles, a PC or a dedicated handheld device like the Nintendo DS or Sony PlayStation Portable. The iPhone expanded the market for mobile games as well as created an entirely new category of touch-based gameplay, persuading even holdouts like Nintendo to come aboard with games based on its iconic franchises. And though the mobile dominant free-to-play model fractionalizes revenue, the potential for brand exposure is unprecedented: Niantic’s augmented reality-angled Pokémon Go alone has been downloaded over 750 million times. Contrast with Nintendo’s entire Mario franchise’s lifetime sales of just over 500 million.

The iPhone has also impacted the health industry. Today, one can use an iPhone to monitor various health metrics as well as access detailed health information, connecting with health professionals and even receiving health advice virtually anytime and anywhere. And we’ve only begun to see how smartphones can impact the health industry, an impact that will doubtless expand as this industry embraces the smartphone for outpatient care.

But the iPhone’s most transformative influence has been on Apple itself. Before the iPhone, Apple was known as Apple Computer. Today it is Apple Inc., a company that makes much more than computers. And the iPhone today accounts for over 60% of Apple’s total revenue, bringing in record profits each year. It’s one of the bestselling products in history, with about 1.3 billion units in global sales, generating more than $800 billion in revenue. Apple is already the most valuable company on the planet by market capitalization, and on track to become the world’s first trillion dollar one.

Looking back over the last 10 years, the hype before the launch of the iPhone if anything underestimated its impact on global industries and individuals. And with Apple on track to define and grow emerging technologies like augmented reality in mobile, Cupertino seems poised to make the iPhone even more important to our digital lifestyles, transforming industries in ways we have yet to imagine. 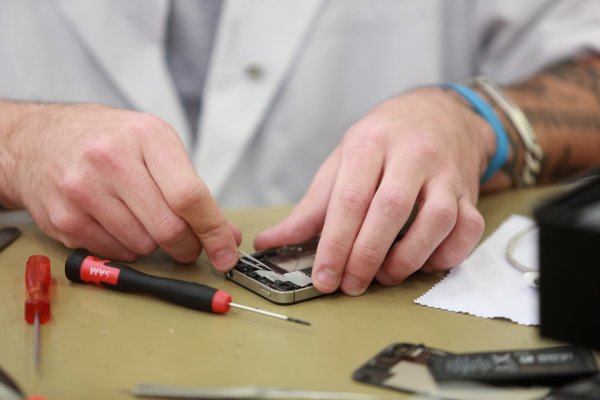 Fixing Your Cracked iPhone Is About to Get Easier
Next Up: Editor's Pick