In an interview discussing his new book, retired tennis star John McEnroe said that while he believes Serena Williams is the greatest female tennis player ever, she would rank “like 700 in the world.”

“If she played the men’s circuit she’d be like 700 in the world,” McEnroe told NPR in response to a question about why he doesn’t call Serena the best player, period. “That doesn’t mean I don’t think Serena is an incredible player. I do, but the reality of what would happen would be I think something that perhaps it’d be a little higher, perhaps it’d be a little lower.”

As the Washington Post pointed out, despite having won 23 Grand Slam titles, Williams herself has made a similar argument in the past, saying as much when asked about playing against Andy Murray during a 2013 appearance on Late Night With David Letterman. “For me, mens’ tennis and womens’ tennis are completely, almost, two separate sports,” Williams said. “If I were to play Andy Murray, I would lose 6-0, 6-0 in five to six minutes, maybe 10 minutes.”

McEnroe was also asked about a match proposed by President Donald Trump, who challenged the seven-time majors singles champion to take on one of the Williams sisters in a battle-of-the-sexes. He said he didn’t really want to do it, but thought he had a good chance at beating her.

“I think I can still play and I think I could still — I mean my kids don’t think I can beat her anymore. Maybe I should get her now because she’s pregnant,” he said. Still, Williams continues to practice even while seven months into her pregnancy. 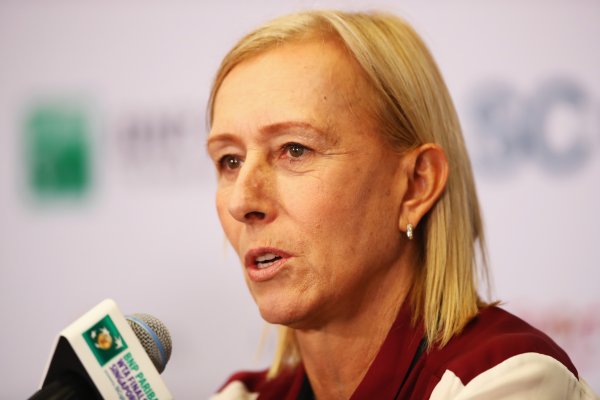 Martina Navratilova: Margaret Court Is a 'Racist Homophobe'
Next Up: Editor's Pick