Twenty years ago, just after midnight on July 1, 1997, Chris Patten and his family boarded the Royal Yacht Britannia in Hong Kong’s Victoria Harbour and sailed off into the night. Not long before, the British flag, which had flown over Hong Kong since 1841, had been lowered and replaced with the red banner of China; Patten had been the last of 28 colonial governors to preside over dynamic territory, and one of the most popular.

He left on a tide of uncertainty: a fear that the return of a freewheeling entrepot to Chinese rule would mean a trampling of its democratic freedoms and way of life. Patten had done his best to bulwark these freedoms before he left; now, two decades later, he worries that he didn’t do enough.

Hong Kong’s political future has never been more fraught with anxiety. The city had been promised democracy — specifically, the right to elect its leader —and in 2014, when that promise had still not been fulfilled, thousands occupied the streets for three months. Meanwhile Hong Kong publishers critical of mainland China have been abducted by Chinese authorities, and a new movement calling for the territory’s independence has been subdued by Beijing’s unprecedented legal interventions.

In a candid recent conversation with TIME, Patten discussed how his government sought to protect Hong Kong from the vagaries of Chinese rule, what he would have done differently, how he feels about where things are today, and his nostalgia for the city that gave him “the happiest years of his life.” (“How hot is it there today?” was the first thing he said.)

Excerpts from that conversation are below.

How many times have you been back in Hong Kong since you left in 1997?

For long time after you left Hong Kong, you kept mum on the subject. What has motivated you to come out and speak so frankly on Hong Kong recently?

I didn’t want to turn into a minute-by-minute commentator on what was happening in Hong Kong. I thought that was unfair to the community itself and unfair to the government. And by and large, for the first few years, I think things went pretty well.

The choking off of any democratic development was unfortunate and sad — but predictable. Margaret Thatcher assumed that there would be full democracy in Hong Kong within ten years — she said that in the House of Lords — and that didn’t happen. But nevertheless, Hong Kong, by and large, was able to retain its freedoms, its autonomy, its way of life.

I think, however, what’s happened in the last few years — perhaps the last two or three years particularly — is Beijing [gradually] applying a tighter grip to Hong Kong’s windpipe. And you see that in all sorts of ways. The attacks on judges and the rule of law. The increased activity of [Beijing’s representatives in Hong Kong] and the way it seems to be interfering in almost every aspect of Hong Kong life. You’ve had abductions in the streets, you’ve had a steady but remorseless squeeze on freedom of the press. And of course, the cutting off of democratic development.

Chris Patten (R), the 28th and last governor of colonial Hong Kong, receives the Union Jack flag after is was lowered for the last time at Government House - the governor's official residence - during a farewell ceremony in Hong Kong, 30 June 1997, just hours prior to the end of some 156 years of British colonial rule as the territory returns to Chinese control.
EMMANUEL DUNAND—AFP/Getty Images

You were the last colonial governor of Hong Kong. Many saw your task as preparing the territory for the return to Chinese rule. To the extent that that was true, what did you see as your objective?

I saw as my objective to do all that I could to bake in the commitments that had been made to Hong Kong’s freedom. I didn’t increase the amount of democracy, but I tried to make sure that the democratic arrangements were at least fair.

At the same time, [we sought] to ensure that the Hong Kong we handed over was in extremely good working order. We’d had 25 years or more of economic growth. The economy was going like a train. And when I left, my view — and I expressed this to some Chinese officials — was that Hong Kong was like a Rolls-Royce or a Cadillac. All you had to do was to take charge of the ignition key, get in, turn on the engine. And the car would go. And I just think the Chinese had some difficulty understanding that.

First of all, it was really sad, leaving a place in which my family and I have been so happy. It was the happiest period in my life. The Prince of Wales, who was on Britannia when we sailed off, said to me afterwards, after we’d said goodbye to so many people on the quay, “Does everyone in Hong Kong play tennis with you?” Because there seemed to be so many people that had been friends of ours. So it was a wrench to leave, because it’s such a wonderful place to live in.

Secondly, it was fantastic to be in a place where we made decisions and things happened. The civil service was terrific. I’d never before been in a job, as a politician, where you made decisions and you saw those decisions turning into concrete and glass and steel while you were still in the job.

But thirdly, I was never hugely pessimistic about Hong Kong. I always felt that the worst thing that could happen to Hong Kong was that it simply became the richest city in China, rather than somewhere special. Because of the people of Hong Kong, I think things have gone pretty well, and I hope they continue to do so.

My worry is that Hong Kong will get caught up in the assault on dissidents and on criticism, which is plainly one of the central features of President Xi Jinping’s government at the moment. Overall, I think that the young men and women who led the demonstrations in 2014 were extraordinary — I think they’re the most civilized demonstrations that I can remember, with one or two very small exceptions.

It’s wrong, I think, to allow a campaign for more democracy to morph into a campaign for independence, because it dilutes support for democracy, and because Hong Kong isn’t a nation-state. It’s a city with a strong sense of citizenship. So I think it just plays into the hands of the hardliners to talk about independence for Hong Kong, which won’t happen.

You talk about the extent to which Hong Kong could become just another Chinese city. Look at the extent to which that’s already happened: the abduction of booksellers, Beijing’s prevention of pro-independence lawmakers taking office. Are these the shards of broken glass, to use your previous metaphor?

I think they are shards of broken glass. I always feared that this would start happening, sooner or later. I think it has to be resisted when it does. We should point out, when these things happen, that they are breaches of the promises that had been made to the people of Hong Kong, for its autonomy, and for its way of life.

My starting point is that Hong Kong remains a free city, with extraordinary vibrant civil society, with still independent courts and the rule of law, with a real commitment to the proposition that prosperity and political freedom are related. And it has that sense deep in its DNA. Do I wish there was greater accountability in Hong Kong? Of course I do. Do I regard the way in which the Chinese have started to pick away at Hong Kong’s autonomy with distaste? Of course I do.

But I think that, as I said at the outset, that Hong Kong’s sense of its own identity and its own Chineseness, as a free society, will outlive whatever it is that Chinese communism means these days. Whenever you go to Hong Kong, you’re struck by two things. First of all, how the city skyline changes. Secondly, how, despite that, you still turn a corner from a modern tower block and find a corner of old Hong Kong waiting to swallow you up.

I hope you get the point that I love Hong Kong. It was a privilege and a pleasure to spend five years there. I think we did quite a good job in Hong Kong, though it could’ve been better. 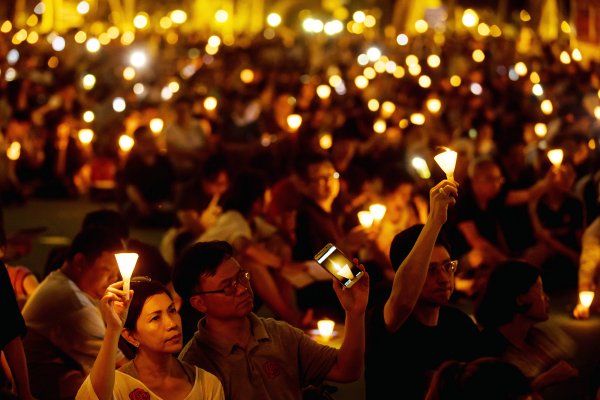