A well-heeled crowd flocked to Manila’s Malacañang Palace the day Rodrigo Duterte gave his inaugural presidential speech. There were former premiers in military garb, bishops in cassocks and collars, and diplomats in barong shirts. But the squat man at the lectern had his collar open, and he rolled his r’s languidly as he addressed the dignitaries before him. Duterte talked, as he so often had on the campaign trail, of corruption, “rampant” drug abuse, and the deterioration of law of order: all of them “symptoms of a virulent disease … the erosion of faith and trust in government.”

That day, in the parlance of inaugural speeches everywhere — and at odds with later threats to “slaughter” three million drug users — Duterte kicked off a “crusade for a better and brighter tomorrow” in the Philippines. The following day police shot dead four people for drug-related crimes in the street. And the day after that, 14 more people were killed.

So began a presidency that would upend national norms, tilt regional politics, and thrust the Philippines into the international spotlight. More than 7,000 people, mostly poor slum-dwellers, have been killed in Duterte’s brutal war on drugs. Relations with Russia and China have warmed as old allegiances with Europe and the U.S. turned frosty. And a still ongoing city siege led by ISIS-linked militants has seen martial law — a phrase never far from Duterte’s lips — declared across the country’s south.

A year after taking office, the populist president remains as popular as ever. Or almost. In a March Pulse Asia Poll Duterte scored a 78% approval rating — high, although Philippine presidents almost always have high approval ratings at the beginning of their terms.

Read more: Local photographers on the frontline of Duterte’s drug war reflect on the images that moved them most

Like that of U.S. President Donald Trump, the rise of the Philippine strongman did not happen in a vacuum. Duterte’s predecessor Benigno Aquino III was widely regarded as uncorrupt, kept the economy growing at an average of 6% per year, and created about 4 million new jobs. But he did not deliver the structural changes required to address abject poverty in the Philippines. Even as the middle classes ballooned in nearby Thailand, Malaysia and Indonesia, the poorest Filipinos saw scant change since wresting democracy from the kleptocrat Ferdinand Marcos 30 years ago. Unemployment remains high and about one quarter of the population lives below the poverty line.

Enter Rodrigo Duterte: a tough talking mayor who would patrol his southern city of Davao on a motorcycle at dusk. Over some 20 uncontested years in charge, Davao’s padrino claimed to have transformed the place into a bastion of order and prosperity in the troubled south. That transformation, it turns out, is overstated: from 2010 to 2015 the city had the highest murder-rate in the Philippines. Still, here was a man who cut through the political quagmire and got things done.

But one year into his presidency — despite the on-paper merit of his 10-point economic plan – Professor Mark Thompson, director of the Southeast Asia Research Centre at City University of Hong Kong tells TIME that Duterte has delivered almost nothing to improve the lot of impoverished Filipinos. “He had that political capital, he had that popularity, and he used it for the drug war, not for programs to help the poor,” Thompson says. Philippine polling agency Social Weather Stations found that half of Filipinos considered themselves mahirap, or poor, an increase of 6% in the first quarter of 2017. That number had declined consecutively over the previous nine quarters.

Working with a fraction of the budget of their Liberal Party rivals, Duterte’s backers ran a masterful campaign to win the Philippines’ first “social media elections.”

But what surprised Maria Ressa, founder of the Philippine news site Rappler, was that rather than dismantling their social media apparatus after the elections, Duterte’s team cranked it up. Ressa tells TIME that state sponsored disinformation campaigns have since been used to smear critics and political opponents, especially female politicians and journalists. “The end goal is to silence dissent; to manufacture consensus,” she says. Duterte’s fiercest critic Sen. Leila de Lima has been imprisoned for four months on dubious charges following an #ArrestDeLima hashtag campaign; Ressa says she was the target of a similar hashtag, and at the height of the smear was receiving more than 2,000 hate messages per day.

Last month, Duterte fired the head of the Dangerous Drug Board for contradicting him. Dr. Benjamin Reyes had used the figure of 1.8 million drug addicts in the Philippines based on a 2015 household survey, rather than parroting the President’s claim that there are 3 or 4 million.

And there have been numerous incidents of Duterte’s cabinet members and official communication channels sharing false news articles. A large contingent of Filipinos derive their news mainly from Facebook and false stories circulate with alarming speed: just 26 fake Facebook accounts can reach 3 million other pages, according to research by Rappler.

But even big-data chicanery cannot insulate Duterte from the latest blow to his image as the Philippines’ protector. Zeroing in on drugs, the first president from Mindanao managed to overlook the terrorist threat in his own backyard.

In December, Duterte said of an ISIS-linked militant group: “They threatened to go down from the mountains and burn down Marawi. Go ahead, be my guest. We will wait for you there.” This May, the militants did just that. More than a month later, an ad-hoc coalition of militants continues to hold sections of the city. Hundreds, possibly thousands of people have been killed and over 220,000 have been forced to flee their homes.

Read more: ISIS in the Philippines: The Battle for Marawi City

Duterte’s absence for almost two weeks at the height of the Marawi crisis has reignited rumors that he’s seriously ill. But Richard Heydarian, a political analyst and author of forthcoming book Duterte’s Rise, tells TIME that reaction from markets and other political actors has so far been pretty muted. “The guy has been ruling with such sound and fury, he’s like a regular fixture in our everyday life” Heydarian tells TIME “It’s psychologically difficult for people, including critics, to imagine a country without him.” 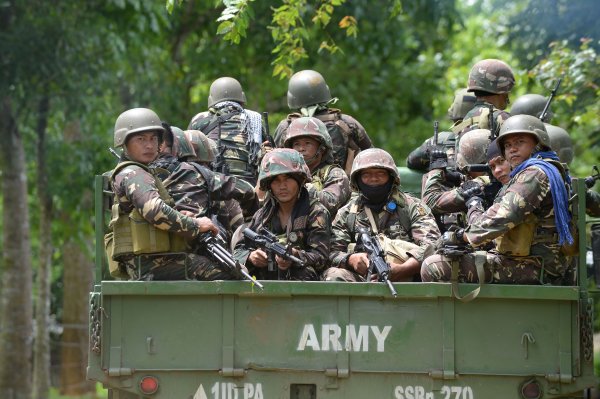