“These are not cuts to Medicaid,”Conway told George Stephanopoulos on ABC’s This Week. “This slows the rate for the future and it allows governors more flexibility with Medicaid dollars because they’re closest to the people in need.”

But the draft of the health care bill Senate Majority Leader Mitch McConnell released on Thursday includes steep cuts to Medicaid, aiming to phase out the federal funding implemented under Obamacare for states to expand Medicaid eligibility.

The non partisan Congressional Budget Office estimated that the House version of the bill would cut Medicaid spending by $880 billion, which President Donald Trump accounted for in his budget. The CBO is slated to release their analysis of the Senate bill this coming week.

Conway said former President Barack Obama had expanded Medicaid in a way that wasn’t always beneficial, and the bill would bring the program back to its “original moorings.” The people who the expansion helped, she said, would initially be grandfathered in but should consider other options.

“Obamacare took Medicaid, which was designed to help the poor, the needy, the elderly, the sick, the disabled also children, and pregnant women, it took it and it went way above the poverty line and opened it up to many able-bodied Americans who should probably find other — should at least see if there are other options for them,” she said. “If they’re able-bodied and they want to work, then they’ll have employer-sponsored benefits like you and I do”

But the Medicaid cuts proposed in the bill are the reason some Senators have expressed hesitation. West Virginia Senator Shelley Moore Capito said she was “evaluating” the bill to ensure it wouldn’t adversely affect her constituents, half a million of whom are on Medicaid. And Nevada Senator Dean Heller, who said on Friday that he could not support the bill in its current form, cited Medicaid cuts as a chief concern.

“I have made clear that I want to make sure the rug is not pulled out from under Nevada or the more than 200,000 Nevadans who received insurance for the first time under Medicaid expansion,” Heller said in a statement after the bill was released. 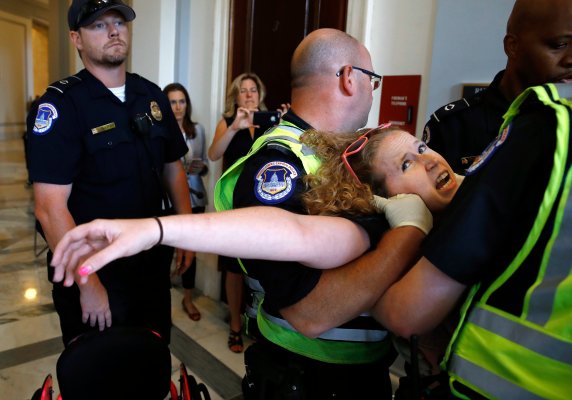 Disability Advocates Forcibly Removed From Senate Protest Say It Was Worth It: ‘We Have the Right to Live’
Next Up: Editor's Pick