A decision by federal officials to revoke special protections for grizzly bears near Yellowstone National Park will put the animals back in the crosshairs of trophy hunters and may reverse decades of conservation efforts, animal activists said.

Federal officials announced the impending move Thursday, touting the growth of the grizzly bear population in the region. But wildlife conservationists argue that lifting protections that have been in place for more than 40 years will leave the bears vulnerable to mass slaughter.

Grizzly bears in parts of Wyoming, Montana and Idaho are no longer considered threatened, U.S. Secretary of the Interior Ryan Zinke said in a statement announcing the move. There are now 700 of the animals in that area, up from as few as 136 bears in 1975 when they were first listed as threatened, the department said. Zinke called the species’ recovery “one of America’s great conservation successes.”

The Interior Department said the rebound means the grizzlies no longer need government protections under the Endangered Species Act. If approved, the decision would put individual states in charge of managing the bears inside their borders. The states, which would control whether the bears can be hunted, have not said whether any open seasons would be declared. Wildlife agencies in Wyoming, Montana and Idaho said in separate statements that any considerations would be made in the future.

But conservationists say the states have signaled their intent to allow grizzly hunting. Wyoming Gov. Matt Mead, for example, has long advocated for the bears to be pulled off the endangered list. In a statement, Mead said the bears would be “managed appropriately” and that hunting decisions would come after a public discussion. With 690 bears, Wyoming has the largest share of the grizzly population.

Regardless of what the states choose, bears in national parks, including Yellowstone, will remain off limits. However, activists point out that animals will often roam outside the boundaries of such parks, especially in search of food. “Bears that are in the parks one afternoon may be outside the park the next morning,” Pacelle said. “They don’t know the boundaries of the park.”

Pacelle added that the animals still face threats from diminishing food sources and habitat loss. He said they never should have been removed from the list, despite their recovery. “We think the bears could end up in a very predicament that necessitated their placement in the endangered species list in the first place,” Pacelle said.

The move will be made official 30 days after the U.S. Fish and Wildlife Service publishes the ruling in the federal register. It would not impact grizzly bears in lower 48 states outside of Wyoming, Montana and Idaho, where they are still protected under the Endangered Species Act.

The federal agency said the issue at hand at that time was the decline of the whitebark pine, a main food source. The Interior Department said the bears have since “been able to find other food sources.” “Therefore, no population decline is anticipated in the Yellowstone ecosystem,” a spokeswoman said.

The Interior Department also said the grizzly population has been stable since 2002 and that its decision was “made based solely on the science.”

“The [Fish and Wildlife] Service does not consider the desires of special interests in making science-based ESA decisions,” the spokeswoman said. 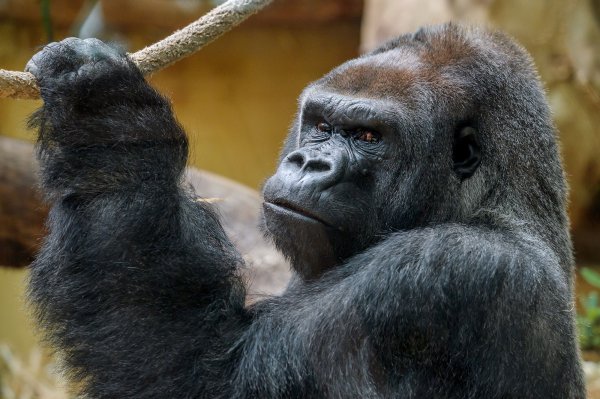 This Intrepid Gorilla Dancer Unanimously Won the Hearts of the Internet
Next Up: Editor's Pick