These Are the Most Colorful Places on Earth

You can find color wherever you go, but there are some places that leave more vivid memories than others.

If you’re looking to douse yourself in the vibrancy of the world’s kaleidoscope, we’ve got some suggestions for you.

From an unexpected pink lake in the Dominican Republic to Iceland’s icy-blue Crystal Caves to India’s Holi festival, there are places all around the globe waiting to be explored.

If the fragrant flowers don’t lure you in, the sea of purple will. Just imagining yourself completely surrounded in a delicious purple cloud is enough to bring your blood pressure down a few points.

The pink color of this lake comes from its high salt content and the organisms living inside of it: algae and little dudes called halobacteria.

These beautiful caves change color depending on the color of the water. The gentle curves of the rock walls make it easier for sunlight to bounce around, reflecting the blues below.

Every spring, rows upon rows of tulips bloom all around The Netherlands. Take a trip to Holland during March or April, and you’ll be treated to a once-in-a-lifetime scene.

These caves weaving through Vatnajökull glacier are a huge destination for tourists looking for a new kind of vacation memory. These ice tunnels are constantly changing — which is why you need to visit them with an experienced guide — given that the glaciers are always shifting.

This tiny street in northwest Portugal has become the subject of many Instagram posts, thanks to the colorful umbrellas providing shade to passersby.

If you thought things could get colorful above ground, just wait until you see the underwater world that is the Great Barrier Reef. There’s just something about the colorful fishes living among the vibrant reef that makes it feel like you’re peeking into a different universe.

This “salt and soda” lake in northern Tanzania can actually be deadly to some animals. According to Live Science, the pH balance of the alkaline water is enough to burn anything that attempts to swim in it. Coincidently enough, it’s the same toxicity level that gives it a red, cracked appearance.

This hot spring in Yellowstone National Park is the deepest in the park. It gets its name from the dark green water it’s filled with, giving it the appearance of a never-ending tunnel into the Earth.

People around the world get together to celebrate the Hindu holiday of Holi, or “The Festival of Colors,” which marks the beginning of spring. One of the most fun activities is tossing colored powered onto everyone in sight, resulting in a human color wheel.

While the medinas of Morocco are colorful on their own, nothing beats the all-blue city of Chefchouen. Every street and building here is painted in a various shade of blue. The city was previously closed off to foreigners for 500 years, but now welcomes travelers in search of a blue paradise with open arms.

This sandstone formation is brushed in hues of brick red and golden yellow, changing colors as quickly as the weather patterns. Depending on when you visit — sunrise, sunset, the dead of night —you’ll get an entirely different palette.

Located in the Arctic Circle, the Tromsø area is home to some of the best Northern Lights shows in the world. If you’re lucky, you’ll even catch a night when the pink lights emerge from the sky.

This red river in Spain gets its tint from thousands of year of mining in the area. Miners search for copper, gold, and silver, but the dissolved iron from the river’s rocks is the reason it’s so red.

These pastel buildings meet the sea in a stunning cliffside scene. The best views are when the coastline is lit up at night illuminating the soft colors against the deepening blue of the sky.

Visit Tokyo at night, and its neon signs will have you looking in every single direction, ten times over. If you thought Times Square was a nighttime sight to see, just wait until you’re lost deep into one of Tokyo’s neighborhood with nothing but the shop and restaurant signs surrounding you.

The Naryshkin baroque style of architecture you’ll find in Moscow is unlike any other. Pair the turrets and rounded design details with the colorful paint palettes and you’ve got yourself a scene straight from a storybook.

This grid of colorful salt ponds is best seen from the sky. These various ponds have been turned different colors because of the micro-algae and microorganisms living in each one.

These neon-colored houses in Cape Town are recognized around the world. This neighborhood is an Instagram Story waiting to happen.

Death Valley During a Super Bloom

It doesn’t happen often, but when Death Valley gets enough rain during the winter months, spring brings with it an explosion of brilliant blooms just waiting to be photographed.

The colorful area of Nyhavn has been around since the 17th century, and is home to a row of vibrant houses, restaurants, and bars. The waterfront location only adds to its charm.

This tunnel of cascading wisteria flowers is a literal dream come true. If you’ve ever wanted to actually live inside a watercolor, head to the Kawachi Fuji Gardens. 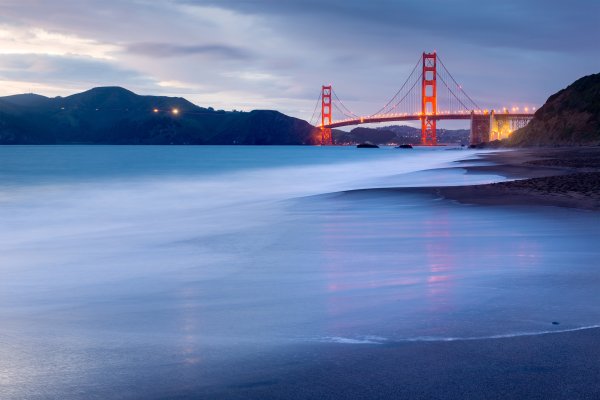 These Are the Best and Worst U.S. Cities for a Staycation
Next Up: Editor's Pick