Students pass time between classes on the campus of Williams College in Williamstown, Mass., on October 22, 2007.
Nancy Palmieri—Bloomberg/Getty Images
By Katie Reilly

The president of Williams College is defending his decision to cancel a controversial speech at the school last year, after he came under fire during a Senate hearing this week about the “assault on the First Amendment on college campuses.”

Williams College President Adam Falk did not attend the Senate judiciary committee hearing on Tuesday, but Williams student Zach Wood did, and Wood testified about what he sees as a lack of politically and ideologically diverse speakers at the Massachusetts private school, where he said “the administration promotes social tolerance at the expense of political tolerance.” Last year, Wood invited conservative writer John Derbyshire — who wrote a 2012 column for an online magazine that was widely criticized as racist, leading to his firing from the National Review — to speak on campus. Falk canceled the event, saying Derbyshire’s comments “clearly constitute hate speech.”

Responding to Wood’s testimony, Louisiana Sen. John Kennedy on Tuesday called Falk unfit to lead the school. “If the way you described it is accurate, then he should resign,” Kennedy said. “It’s just that simple — because he needs to explain to students and have them understand that they do not have a constitutional right in life not to be offended. They’re going to be offended plenty of times in life.”

In an interview with TIME after the hearing, Falk defended himself, saying he believed Kennedy had misunderstood the situation. Falk said universities across the country have been tested by “the toxic political culture that all of us are currently swimming in,” but he believes Williams has remained a welcoming place for public debate.

“There are things in the broader culture that have changed. We are a much more combative political culture,” Falk said. “Our campuses are more civil than what you get when you turn on your TV or open your Twitter feed.”

During the hearing, as Senators debated First Amendment issues that have riled campuses from Middlebury to Berkeley this year, they continued to ask where the line should be drawn between speech that is protected and prohibited. Falk said visiting speakers should “contribute to a serious intellectual discussion of serious ideas,” adding that the college doesn’t have an obligation to host speakers, like Derbyshire, who aim only to provoke.

“It has always been the responsibility of the administration at a university to foster an environment where discourse around a wide variety of ideas expressed by a wide variety of people is effective and flourishes. That’s part of what we do to run a college and university. And that work is much more complex than simply, in an indiscriminate way, giving a platform to anyone who wants to speak,” Falk said. “Freedom of speech is a fundamental value of society, and it’s a fundamental value on our campuses. But we also have to create conditions where that speech is civil and the dialogue that it spawns is productive.”

While state lawmakers are considering legislation to regulate student protesters and discipline hecklers, Falk said such measures are unnecessary.

“We do our best to manage these challenges,” he said. “But they’re not existential, they’re not unprecedented.” 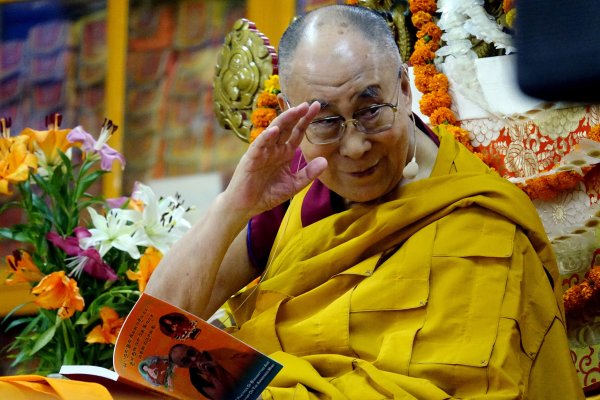 Why the Dalai Lama's University of California Commencement Address Is Controversial
Next Up: Editor's Pick