Syria's Economy Will Take At Least 30 Years to Recover, Says the U.N.

An elderly Syrian man and a child walk amidst debris in a residential block reportedly hit by an explosives-filled barrel dropped by a government forces helicopter on March 18, 2014 in Aleppo.
Baraa Al-Halabi—AFP/Getty Images
By Aryn Baker

To many, the cost of war is immeasurable. How is it possible to assess the value of lives lost, of broken health, of destroyed and dislocated families? Assessing the economic impact, however, is an easier undertaking. It is quantified in lost productivity, declining GDP, and, in the case of Syria, a bitter prognosis about the amount of time it will take to recover from a three-year war that has already claimed 150,000 lives. A recent report from the United Nations Relief and Works Agency estimates that it will take decades for Syria to recoup the cost of war. “Even if the conflict ceased now and GDP grew at an average rate of five per cent each year, it is estimated that it would take the Syrian economy 30 years to return to the economic level of 2010,” says the report, calling the situation an “economic catastrophe.” The survey, conducted by UNRWA’s microfinance department, focused mostly on the impact the war has had on the organization’s 8000 client borrowers in Syria, so it tends to skew towards the lower rungs of the country’s economic spectrum. Still, as a window into the financial status of small businesses in a country where accurate polling is hard to come by, it offers a bleak assessment of Syria’s future.

More than two-thirds of UNRWA’s clients had fled their homes by June 2013, according to the survey, and only 13% of their businesses were still functioning. Overall, notes the report, citing the most recent economic data available, Syria’s economy lost a total of $84.4 billion during the first two years of the war alone, and 2.33 million jobs. As a result, half the workforce is unemployed and more than half the population is living in poverty. “The current crisis in Syria is the deepest and most destructive of people’s lives and livelihoods that the program has encountered over the past two decades,” says the report. UNRWA’s micro-finance agency should know: previous projects were based in the economic swamps of Gaza and the West Bank.

Capital flight, de-industrialization, looting and destruction of Syrian factories and businesses both large and small has seen GDP contract more than 30% each quarter of the last fiscal year, an unprecedented economic chute, says Jihad Yazigi, editor the online economic digest The Syria Report. “You can’t even compare the destruction in Syria to Lebanon’s civil war, or Bosnia. This is on the level of World War II. We are seeing a reversal of decades of economic development, and I don’t know how, if ever, Syria will recover.” He says that the UNRWA assessment is optimistic. “It could take 40 to 50 years to recover.”

Either way, the economic toll will not be limited to Syria alone. There are more than 2.5 million Syrian refugees in neighboring Lebanon, Jordan, Iraq and Turkey, and even though international aid agencies help host countries, it is rarely enough to make up for the infrastructural burdens. And the refugees are likely to remain in place until they have something worthwhile to go back to, which could take years. “How are we going to get these people back to their villages in Syria, to rebuild what has been destroyed?” asks Sami Nader, an economist and professor at Lebanon’s St. Joseph University. “All the factories are destroyed; where will they work?” According to the United Nations, there are now more than one million Syrian refugees registered in Lebanon, making up a quarter of the country’s population. Lebanon’s own economy, beset by insecurity and political volatility, was already on the verge of bankruptcy, says Nader. “This Syria situation could just push us over the edge.” The cost of war isn’t just immeasurable. It doesn’t know borders, either. 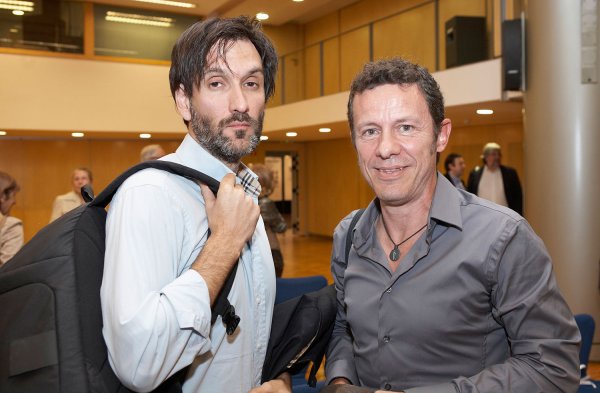 Spanish Journalists Freed in Syria After Kidnapping
Next Up: Editor's Pick