Male students in the U.K. are protesting the no shorts dress code at their school after a heatwave by wearing the uniform skirts that female students wear.

Schoolboys attending Isca Academy in Exeter, Devon had asked teachers if they could wear shorts instead of pants to school as temperatures climbed into the 80s; however, their request was denied as per the school’s uniform policy. When some of the boys pointed out that girls were allowed to have bare legs because they wore skirts, school management told them (most likely in jest) they could sport skirts as well, which many boys did starting on Wednesday.

According to The Guardian, by Thursday, at least 30 boys chose to wear a skirt instead of pants with one of the boys calling the experience “quite refreshing” and another commenting on the “nice breeze” he got from wearing one. Some boys even took it to the next level by picking up razors to keep things smooth while showing some leg.

The skirt-fueled protest might just be working. Isca’s headteacher Aimee Mitchell told The Guardian that the school is currently doing “the utmost to enable both students and staff to remain as comfortable as possible.” She also mentioned that the school is open to considering changing the dress code, especially when it comes to hotter weather.

“Shorts are not currently part of our uniform for boys, and I would not want to make any changes without consulting both students and their families,” she said. “However, with hotter weather becoming more normal, I would be happy to consider a change for the future.” 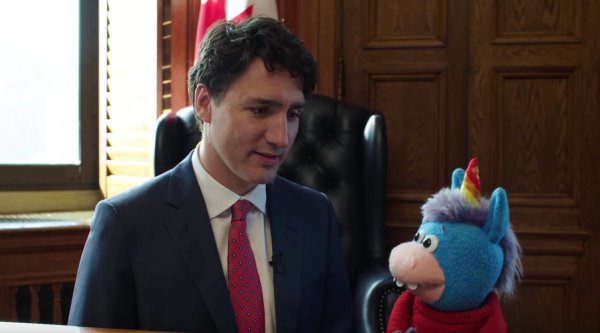 You Can Now Watch As Justin Trudeau Cuddles a Puppet With the 'Squeeziest' Hug He Can
Next Up: Editor's Pick