When many Americans think of the birth of the civil-rights movement, they may think of event in the mid-1960s or just before that decade. But in fact, one of the earliest headline-grabbing demonstrations for civil rights took place a century ago this Friday.

The story had begun weeks earlier, when two plainclothes detectives in an unmarked Model T in East St. Louis, Ill., were shot by black citizens. In the aftermath, on July 2, 1917, a mob of white residents went after African Americans in the city, resulting in the deaths of at least 48 residents — 38 of them black men, women and children — and injury to hundreds more, as people were clubbed and pulled off streetcars. Buildings were set on fire, racking up $373,000 in damages (which would be almost $7 million in 2016) by some counts.

As it turned out, the people who shot at the undercover cops had mistaken their car for one of the many Model Ts driven by whites who had been going through black neighborhoods throughout that springtime, shooting at the windows of their homes and stores. Around that time, fake news stories were running in local newspapers, containing inaccurate reports of African Americans committing crimes including rape says Harper Barnes, a former critic for the St. Louis Post-Dispatch and author of Never Been A Time: The 1917 Race Riot That Sparked The Civil Rights Movement. As a result of those events, African Americans had been armed out of self defense.

What happened in East St. Louis “was the first major race riot of the World War I period,” says Barnes.

This fake crime wave was being attributed to the real nationwide migration of blacks moving up from the South to northern industrial cities in the 1910s, lured by higher-paying jobs. As populations moved into much closer geographic spaces, fear and resentment grew, especially during the tense time after America’s entry into World War I in April 1917. Amid labor tensions, many white workers saw black social mobility as a threat. “The meatpacking bosses recruited black labor to replace striking white workers,” says Clarence Lang, professor and chair of the department of African and African-American Studies at the University of Kansas.

New government contracts prompted labor disputes, and strikers were accused of being unpatriotic for holding up production. And it wasn’t just a matter of meatpacking. The government worried this would happen at the Aluminum Ore Company in East St. Louis, the only factory in north America that processed boxes of ore into aluminum. As Malcolm McLaughlin, historian and author of Power, Community and Racial Killing in East St. Louis, explained to TIME in an email, black migrant workers were “employed not only to take on the strikers’ jobs but also frankly to rub their noses in it: you are siding with the enemy; you have no power; we will replace you with people you despise.”

After the July 2 riot, W.E.B. DuBois and Martha Gruening went to the city to talk to witnesses and survivors of the tragedy, and wrote an essay on the event for the NAACP’s The Crisis. It contained gruesome details of the riot and made the argument that violence against the black community of East St. Louis was bad for the economy:

On a local level, all that residents saw in the aftermath was increased segregation. The neighborhoods in which the city’s black population lived had been eyed by businessmen for commercial real estate development purposes, and the rioting provided an excuse to get some of that going, says Charles Lumpkins, a historian at Penn State University an author of American Pogrom: The East St. Louis Race Riot and Black Politics.

Outside of East St. Louis, however, there was outrage that lynching wasn’t just something that happened in the South. It was happening in the booming, northern industrial cities, so a Congressional inquiry followed, “justified on the basis that the riots had disrupted interstate commerce,” says McLaughlin.

The rioting helped focus anti-lynching legislation efforts — and led to the “Silent Protest” parade on July 28 of that year, in which as many as 10,000 African Americans marched in silence down New York City’s Fifth Avenue. It was intended to raise awareness of and send a message to President Woodrow Wilson (who promoted segregation in the civil service) about the “lawless treatment” of African Americans, as the New York Times reported in 1917. It’s that march that’s now seen by many as the first march of the 20th century civil-rights movement.

As McLaughlin puts it, the rioting in East St. Louis in 1917 and the subsequent protests represent “the beginnings of a modern, national approach to civil rights.”

A photo caption in the original version of this story misstated the year during which the parade took place. It took place in 1917, not 2017. 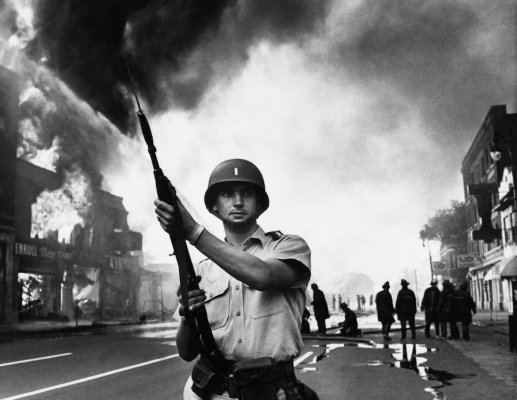 The Riot That Started in Detroit 50 Years Ago Had a Hidden Political Side
Next Up: Editor's Pick