Why Canada Day Is Not the Same as Canadian Independence Day

A fireworks display over the Alexandra Bridge and National Gallery as viewed from Parliament Hill as thousands gather to celebrate Canada Day on July 1, 2012, in Ottawa, Canada.
George Rose—Getty Images
By Olivia B. Waxman

This year’s Canada Day celebrations on Saturday will be particularly special, as Canada celebrates its 150th birthday: It was July 1, 1867, that the British North America Act united the British provinces of New Brunswick, Nova Scotia, Quebec and Ontario into the Dominion of Canada.

But the reason for uniting back then was far from the celebration of nationalism that the day represents now.

After the Northern U.S. states won the American Civil War, there was a big concern in British North America and London that “the victorious Americans up North would take Canada, and much of the motivation [for uniting the provinces] was to have a stronger line of defense against the U.S.,” says Peter H. Russell, a political scientist who specializes in Canadian history. “The other thing was, the constitution-makers — we call them ‘Fathers of Confederation’ — were convinced that what led to the Civil War was a weak federation, so they tried to create a much stronger federal government than America has.”

The name Canada wasn’t established in 1867, however; it’s derived from the Huron-Iroquois word “kanata,” meaning “village” or “settlement” and had been in use since the 16th century, when locals pointed French explorer Jacques Cartier in the direction of the “village” now known as Québec City. That Canada became a “Dominion” is also a uniquely American story, Russell argues. The Confederation was originally to be named a “kingdom” of Canada until “the British foreign office said, ‘The Americans won’t like a kingdom on their border, call it something else, or we’re going to have bad relations with the Americans.'”

Leonard Tilley, one of the Fathers of Confederation, was inspired to suggest the word ‘dominion’ by Psalm 72:8, which states that Jesus Christ “shall have dominion also from sea to sea, and from the river unto the ends of the earth.” (The Latin version, “A Mari Usque Ad Mare,” became the country’s national motto.) So that’s why Canada Day was originally known as “Dominion Day” when the July 1 national holiday was established in 1879.

And, though some histories refer to Canada Day as “Canadian Independence Day,” this new Canada maintained a strong connection to Britain and the U.K.’s military provided a sense of security for the new nation.

Canadians acquired increasing independence from Britain gradually, over time. For example, after World War I, on Jan. 10, 1920, Canada joined the League of Nations as an independent nation. “When they started to drive the Germans out of the trenches, all under Canadian command, it was the first time all the Canadians fought together. [That] gave them a sense that they didn’t want to be run by British empire,” says Russell.

Full governmental independence would be achieved even later, via the Canada Act of 1982, in which the British Parliament transferred the power to change Canada’s constitution to the Canadian Parliament. (Queen Elizabeth II, however, retains her role as Queen of Canada.)

A few months after the 1982 law was passed, a bill changed the name of Dominion Day to Canada Day. 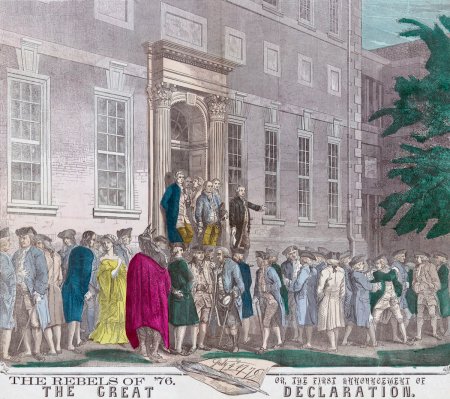 Move Over, Fourth of July. There May Be a Better Day to Celebrate America's Independence
Next Up: Editor's Pick