Schools across the U.S. and Europe may have begun banning fidget spinners, but the popular children’s toy has nothing on the new kid’s contraption sweeping China.

Enter the toothpick crossbow. These miniature plastic or metal ballistas can fire a toothpick with enough force to pierce cardboard or — if loaded up with metal needles instead of wooden skewers — a soda can, the BBC reports.

The toy has become so ubiquitous that some cities have begun banning them, and parents are up in arms out of fear that children could easily be injured or blinded by accident.

According to Chinese media, the cities of Chengdu, Kunming, Harbin and others have already banned the crossbows, which can be bought for the equivalent of one dollar. But some parents have called on social media for a nationwide embargo.

“Hurry up [and ban them], pupils do not understand and are just shooting people for fun. It will cause accidents sooner or later,” one parent wrote on Chinese social media site Weibo, Agence France-Presse reports.

China’s largest two online retailers, JD.com and Taobao, have already stopped selling the toy weapon. Police have also cracked down on retailers selling the toothpick crossbow near schools, according to Chinese media cited by the BBC. 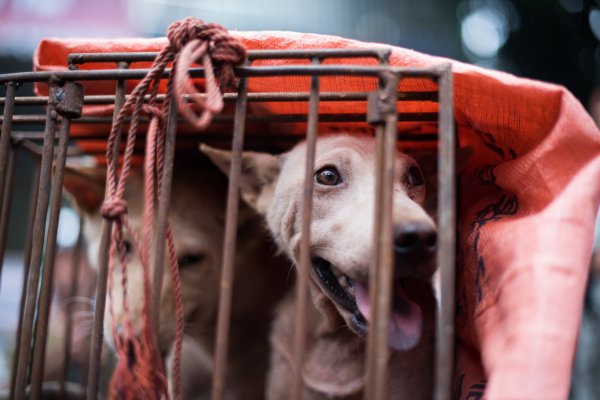 China: Activists Save 1,000 Animals Ahead of Dog Meat Festival
Next Up: Editor's Pick