Young people jump over a bonfire as they take part in the Ivan Kupala Night celebration, a traditional Slavic holiday, outside the small town of Turov, on July 6, 2016.
SERGEI GAPON—AFP/Getty Images
By Melissa Chan

Thousands of sun worshipers across the world Wednesday will celebrate the summer solstice with centuries-old rituals that include burning effigies and leaping over bonfires, as well as newer traditions like practicing yoga.

The event marks the official start of summer and the longest day of the year in the Northern Hemisphere. It’s a joyous occasion and considered a major holiday in some countries, including Russia and Ukraine.

“It’s a fun holiday,” said Natalie Kononenko, a professor and Kule Chair in Ukrainian Ethnography Arts at the University of Alberta in Canada. “You go swimming. People get drunk. You overeat. It’s a joyful time.”

Here are some of the ways people celebrate around the world:

Catch the sunrise at Stonehenge

Thousands of people descend on England’s famous Stonehenge every year to herald the summer solstice. The prehistoric site of ancient stones in Wiltshire may have been a sacred place of worship and celebration for the summer solstice for thousands of years, according to English Heritage, which manages the popular destination. It is known for its precise alignment with the sun’s movement, although how and why the site was first built remains a mystery. About 12,000 people flocked to Stonehenge last year to dance, play the drums, kiss the stones and do yoga as the sun came up, the Associated Press reported. The iconic site drew some 23,000 in 2015.

Do yoga in India

The relatively new tradition in India of practicing yoga in honor of the summer solstice recently carried over to the U.S., where thousands gather in New York City to do yoga. Americans have also turned to baseball in honor of the international event. In Fairbanks, Alaska, residents have played an annual Midnight Sun baseball game since 1906, TIME previously reported. A player throws the first pitch at 10:30 p.m., and the game continues into the next morning.

Take in pagan traditions in Russia

People in the Slavic nations — including Russia, Belarus and Ukraine — celebrate the start of the summer with a pagan celebration more commonly known as Ivan Kupala Day. The event marks the summer solstice but usually takes place shortly afterward, in July. Revelers typically make an effigy out of plants and later burn or otherwise destroy it, according to Kononenko. The act is believed to be a sacrifice to ensure a good harvest. “It’s purification,” Kononenko said.

Teenagers and young adults also jump over bonfires — sometimes while holding hands with a potential suitor as a courtship ritual. “If you jump over the fire, and a boy and a girl are holding hands and they’re still holding hands when they’ve jumped over, they’ll get married,” Kononenko said.

Girls and young women also wear floral wreaths on their heads until later on in the festivities when they take the head pieces off, light candles in them and sail them down a stream. “Where the wreath goes is where you’ll go when you get married,” Kononenko said. “If a boy manages to jump into the stream and get the wreath, they’ll be married.” 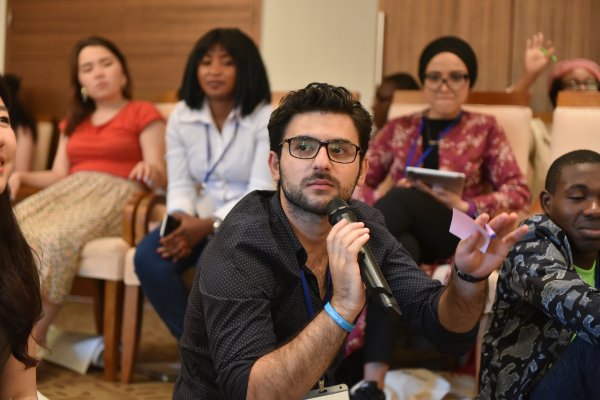 ‘I Started at Zero’: How a Syrian Refugee Is Rebuilding His Life Through Education
Next Up: Editor's Pick