Riding in a carriage can be tricky. Just ask the Countess of Wessex, daughter-in-law of Queen Elizabeth II, who appeared to stumble on Tuesday in the old-fashioned vehicle on a formal parade. But luckily for the Countess Sophie, her fellow carriage passenger the Duchess of Cambridge was there to catch her in her fall — a funny moment that the two women subsequently shared a laugh about, as caught by nearby cameras.

Kate Middleton, Prince William, and the Earl and Countess of Wessex were all riding together in a carriage for four during a parade for the Royal Ascot, an annual prestigious horse race and popular event in British high society. Bedecked in top hats and tail coats, the gentlemen cut a dapper figure while the ladies opted for garden party dresses (and, of course, the de rigueur hats).

The Queen herself also made an appearance later in the day to kick off the races. It’s a historic event, one that’s been held each year dating back to the early 18th century under the leadership of early monarch Queen Anne. About 300,000 spectators are expected to attend the races over the five days they are held, which kicked off Tuesday. 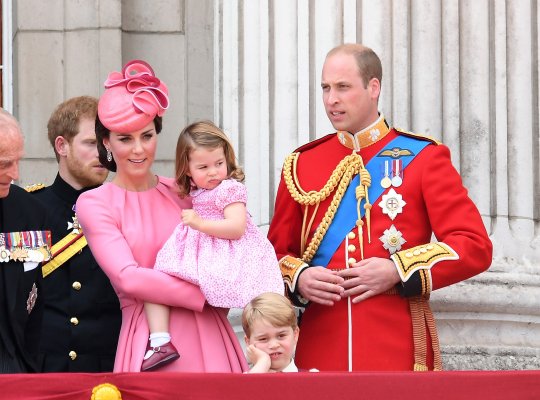