Donald Trump wants to drag us back into one of the most catastrophic social policies in this nation’s history: the war on drugs.

The president wants to return to a bygone era of mass incarceration and a full-blown War on Drugs that significantly contributed to the current American prison population of 2.2 million people — the largest in the world. Apparently, that isn’t enough for the “law and order” president and his accomplice, Attorney General Jeff Sessions.

Trump and Sessions think the War on Drugs has been a very good thing. They are either woefully or willfully ignorant of the facts.

As author of The Power of the Dog and The Cartel, I spent almost 20 years researching and writing about the War on Drugs. After five decades of this war, drugs are cheaper, more plentiful and more potent than ever (as Mr. Sessions himself has conceded). If that’s Trump’s idea of success, I’d hate to see his version of failure.

The so-called War on Drugs quadrupled our prison population (overwhelmingly and disproportionately composed of minorities), handed out life sentences to nonviolent offenders, militarized our police forces, promoted the disgusting concept of for-profit prisons, shredded the Bill of Rights and cost taxpayers upward of a trillion dollars.

Did Trump and Sessions somehow miss all this? Surely the president and the top justice official in the country are aware that violent crime is at a a record low, and most criminologists agree that incarceration was a minor factor in its thirty-year decline. The more important causes were demographic changes, improved police techniques, community policing and strong economic growth.

Trump and Sessions cite a rise in homicide rates in some cities since 2015. But fully half those murders, mostly a result of gang violence, occurred in one city — Chicago — while many of the rest were concentrated in Houston, Baltimore, and Washington, D.C. The murder rate in New York City actually dropped 25% during that period.

Trump and Sessions blame this gang violence on drugs, but that’s reductive to say the least.

Let’s look at Chicago. Writing in US News & World Report, Alan Neuhauser points out that the Chicago police force has lost a quarter of its homicide detectives since 2008. And two years ago the state of Illinois drastically cut funding for community policing and violence prevention programs, which directly corresponds to the spike in violence.

Chicago police superintendent Eddie Johnson said, “Impoverished neighborhoods, people without hope, do these kind of things… You show me a man that doesn’t have hope, I’ll show you one that’s willing to pick up a gun and do anything with it.”

Johnson has a point. A study by the Brennan Center for Justice shows that cities with at least a ten-year history of poverty and unemployment are the same cities that have experienced a rise in violence.

That there is a relationship between poverty and crime should come as no surprise to our country’s chief executive and his top law enforcement official, but apparently it does.

Trump and Sessions want to cut funds for social programs and community policing and return to the era of mass arrests and incarceration — in short, the War on Drugs. They want to trade policies that work for policies that don’t.

Sessions’s assistant Steven Cook told the Washington Post, “Drug trafficking is inherently violent. Drug traffickers are dealing in a heavy cash business. They can’t resolve disputes in court. They resolve the disputes on the street and they resolve them through violence.”

Mr. Sessions made remarks to the same effect.

And they’re right: Drug trafficking is inherently violent. Because of drug prohibition.

Apparently, the current administration doesn’t mind that these policies are racist. Prompted by his boss, Mr. Sessions recently instructed federal prosecutors to seek maximum sentences for even nonviolent drug offenses.

It’s wrong, and it makes no sense on any level.

We know that rehabilitation programs and treatment are vastly more effective at reducing drug use than imprisonment. In fact, our jails and prisons are rife with illegal drugs, and those who go in as addicts usually come out as addicts. If mass incarceration worked, wouldn’t our drug problem now be better instead of worse?

But rather than make a real effort to address the drug problem at its roots — at a time when more Americans die from opiate overdose than from car accidents — Trump and Sessions hand us fantasies such as the border wall, which will do absolutely nothing to slow the flow of drugs, and facile, intellectually lazy, “lock `em up” sound bites that make for good politics but horrible policy.

The mass incarceration policy is also a fiscal disaster.

An administration that prides itself on trimming the budget wants to expand our spending on prisons, even though a year spent in a California cell is more expensive — $75,650 — than a year at Harvard. As of 2012, the United States spent $63.4 billion a year on incarceration. Trump and Sessions want to spend even more.

Trump and Sessions are tough on gangs that wield guns, but not so much on those who push guns on the American public. The National Rifle Association donated over $30 million to Trump’s campaign, and he promised, among other things, to end “gun-free zones.” The attorney general has an A+ rating (along with $35,750 in Senate campaign contributions) from the NRA and has voted against background checks on buyers at gun shows.

My most recent novel, The Force, deals with the New York Police Department’s struggle against drugs and guns. My research shows that most of the weapons used in gang violence originate in states that have weak gun laws and unrestricted gun shows. From there, buyers ship weapons up the “Iron Pipeline” of Interstate 95 and its connecting highways, to cities such as Chicago, Baltimore, and Washington, D.C.; guns that police forces are desperate to get off their streets; guns that kill gang members, innocent bystanders, and, yes, cops. But Trump and Sessions advocate loosening what few restrictions still exist.

That is not law and order. That is lawlessness and disorder.

In the last days of the Obama administration, we finally began to see a more sensible policy toward illegal drugs: clemency for nonviolent offenders serving long prison terms, a move to end mandatory minimum sentences, a less aggressive stance on enforcing marijuana laws and the abolition of prison privatization on the federal level.

In his endless, thoughtless rush to undo all things Obama, Trump wants to roll all that back, to a failed policy that will only result in more suffering, more expense, and more death.

Don Winslow is the author of The Cartel and The Force. 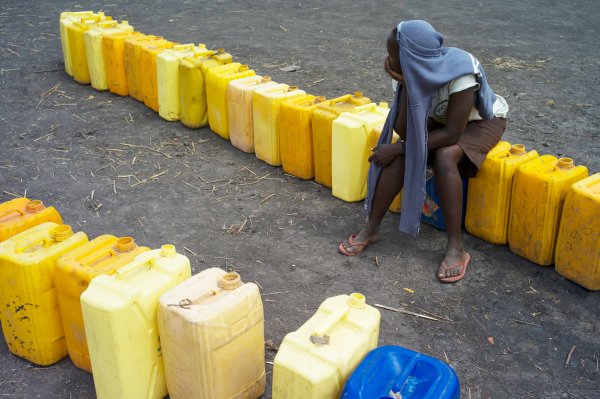 Kofi Annan: Why Are Only Poor Countries Taking Refugees?
Next Up: Editor's Pick