South Korea’s new president partially blamed North Korea for Warmbier’s death in an interview with CBS This Morning on Tuesday. The 22-year-old American student arrived home in Cincinnati in a coma last week after being detained in North Korea for more than a year.

“This had happened while Mr. Warmbier was in the detention of North Korean authorities,” Moon said. “We cannot know for sure that North Korea killed Mr. Warmbier. But I believe it is quite clear that they have a heavy responsibility in the process that led to Mr. Warmbier’s death.”

Moon did not go as far as some U.S. politicians who said Kim Jong Un’s regime murdered Warmbier, but he strongly condemned the “unjust and cruel treatments to Mr. Warmbier.”

“Even today, there are many Korean nationals and American citizens who are detained in North Korea,” he said. “I also urge North Korea to return these people to their families.”

Warmbier’s family announced his death on Tuesday — a week after he was released. Doctors in Cincinnati said he had “severe injury to all regions of the brain” and was in a state of “unresponsive wakefulness.”

Before returning to the U.S., Warmbier had been serving a 15-year long prison sentence with hard labor for allegedly trying to steal a propaganda poster from Pyongyang while visiting North Korea on an organized tour. North Korean officials declared it a “hostile act.”

President Donald Trump, Vice President Mike Pence and a number of other U.S. politicians have condemned North Korea in response to Warmbier’s death.

“Otto’s fate deepens my Administration’s determination to prevent such tragedies from befalling innocent people at the hands of regimes that do not respect the rule of law or basic human decency,” Trump said in a statement Tuesday. “The United States once again condemns the brutality of the North Korean regime as we mourn its latest victim.” 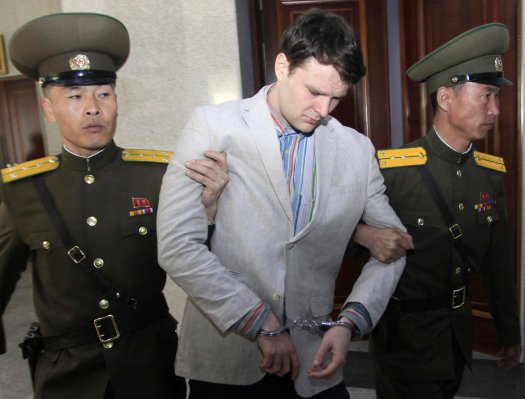 What Can the U.S. Do After Otto Warmbier's Death? Sadly, Not Much
Next Up: Editor's Pick