Otto Warmbier, the American college student who was released last week after being detained in North Korea for more than a year, died Monday afternoon, his family said.

Warmbier arrived in his hometown of Cincinnati in a coma last week and received treatment at the University of Cincinnati Medical Center. Doctors said he had suffered “severe injury to all regions of the brain” and was in a state of “unresponsive wakefulness.”

“It would be easy at a moment like this to focus on all that we lost — future time that won’t be spent with a warm, engaging, brilliant young man whose curiosity and enthusiasm for life knew no bounds,” Warmbier’s family said in a statement on Monday, announcing his death. “But we choose to focus on the time we were given to be with this remarkable person.”

U.S. officials condemned North Korea’s treatment of Warmbier, who spent more than a year in a coma. “Let us state the facts plainly: Otto Warmbier, an American citizen, was murdered by the Kim Jong-un regime,” Arizona Sen. John McCain said in a statement. Vice President Mike Pence called his death “a tragic example of North Korea’s disregard for human life.”

President Donald Trump called North Korea a “brutal regime” and said he was glad Warmbier was home with his family when he died.

“Melania and I offer our deepest condolences to the family of Otto Warmbier on his untimely passing. There is nothing more tragic for a parent than to lose a child in the prime of life. Our thoughts and prayers are with Otto’s family and friends, and all who loved him,” Trump said in a statement.

“Otto’s fate deepens my Administration’s determination to prevent such tragedies from befalling innocent people at the hands of regimes that do not respect the rule of law or basic human decency. The United States once again condemns the brutality of the North Korean regime as we mourn its latest victim.”

Warmbier, who was 22, had been serving a 15-year prison sentence with hard labor for allegedly trying to steal a propaganda poster from a hotel in Pyongyang — which North Korean officials classified as “a hostile act.” The University of Virginia student had been in the country for five days on an organized tour with Young Pioneer Tours when he was arrested on Jan. 2, 2016 while boarding a flight to Beijing. He was convicted and sentenced in a one-hour trial, during which he tearfully confessed to trying to steal the poster.

“Unfortunately, the awful torturous mistreatment our son received at the hands of the North Koreans ensured that no other outcome was possible beyond the sad one we experienced today,” his family’s statement said on Monday. 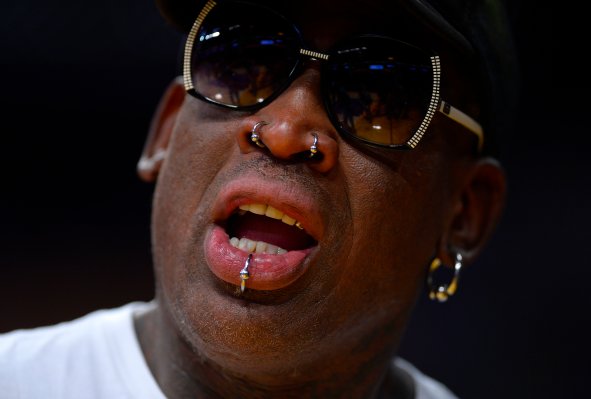