Portland's Mayor on Protests, Riots and the 'Missing Middle'

When Ted Wheeler took office this year as the new mayor of Portland, Ore., there had already been signs of trouble in the hipster paradise. Following the election in November, several days of anti-Trump protests eventually turned into what police deemed a riot, as baseball bat-wielding protestors broke windows and refused to disperse. About two dozen people were arrested.

Among those on the streets were far-left antifascist and anarchist activists who have been showing up in cities like Berkeley, Seattle and Washington, D.C. — often in clashes with alt-right extremists. And they were back in action in Portland again this month, after a tragic incident on a commuter train became a flash point in the national conversation about America’s civility drain.

Two men died while sticking up for two young women, one of whom was wearing a hijab, after a knife-wielding man starting yelling anti-Muslim slurs at them. In his arraignment, the suspect in the stabbings cast himself as a champion of “free speech.” As tensions flared, Wheeler asked right-wing organizers to cancel an upcoming “free speech” rally and asked the federal government to revoke a permit for the event, but both parties declined. Thousands of ralliers and counter-protesters showed up. More than a dozen were arrested this time.

Uncompromising groups on either end of the spectrum have been casting one another as the unreasonable villain in these blowups. While those on the right say leftist groups are attacking free speech by using chaos and vandalism to “shut down” conservative viewpoints, those on the left say that right-wingers are using the First Amendment as cover for spewing hateful ideologies.

TIME spoke to Wheeler about what he has been seeing in his town of 639,000 in the Pacific Northwest and how the Democrat sees these incidents fitting in to tensions that are being felt across the country. (The following has been edited for brevity and clarity.)

TIME: How would you sum up what’s been going on in Portland?

Ted Wheeler: Portland has a long history of protest and counter-protest. People in Portland are politically very engaged and the expression of political ideas is nothing new to this community. Obviously since the election of Donald Trump we’ve seen more intensity both in terms of increased protests from the far right and protests from the far left.

What does this say about the broader national climate?

Number one, the election of Donald Trump was an unwelcome surprise to people on the left, particularly the far left. In terms of the far right, the rhetoric coming out of the White House has certainly emboldened alt-right viewpoints. And because Portland is a very progressive community, it’s a target for alt-right protests. That being said, people have come and expressed their points of view on all sides. And for the most part, the protests have been peaceful with minimal injuries, arrests or vandalism.

When protests have led to damage or violence or arrests, why has that happened?

That’s probably more of a tactical question. My job is to make sure that as people express their First Amendment rights, the public safety is maintained. Prior to my taking office in January, there was a situation in November where there was a considerable amount of vandalism and violence. So upon taking office, I made it very clear we would support the right to peaceful protests but we also set clear expectations: no violence, no vandalism, no occupying bridges, no entering onto freeways.

What role are antifascist and anarchist groups playing?

It fits into the larger polarization of political viewpoints in America. The antifascist movement and the alt-right movement are both relatively small movements compared to the population as a whole, but increasingly it’s the far right and the far left clashing on the streets of American cities. What’s missing in the conversation is people in the center calling for a calm and rational discourse. The country is definitely dividing, and that’s very concerning to me. And as a mayor, it increases the challenges around keeping people separated and maintaining the peace.

Some antifascist groups have been justifying tactics like property damage, saying the real violence is racist, sexist speech. What is your take on that line of thinking?

First of all, I’ll draw a clear line. Vandalism or violence are against the law and we do not tolerate either. And we will enforces the laws. That is completely separate from exercising one’s First Amendment rights to free speech. First Amendment rights, as with all rights, come with implied responsibilities. We support the rights of people to come and express different points of view. And to some degree I think that should be encouraged, that people should express different points of view and we should listen to what other people are saying and be exposed to different ideas than those that we hold ourselves. That’s a uniquely American value. But people also have to exercise those rights responsibly, and when you cross the line into violence or vandalism, that’s no longer, in my view, an expression of First Amendment rights. That’s a violation of the law.

Many on the left have claimed that people on the right, especially the alt right, are using the words “free speech” as a cover for spreading hateful ideologies. What is your take on that?

Why did you call for the rally to be canceled after the incident on the train?

[In the commuter train incident, the alleged perpetrator] was using what I would personally describe as hate speech. It was certainly hateful and it was certainly bigoted speech. And [three men] stood up to protect these young women and two of them paid with their lives and a third was seriously injured. Less than a week later, the alt right wanted to have a protest in the city of Portland.

… So I made a call that was oversimplified in some of the national press as being anti-First Amendment. While I support the First Amendment and I support the right for people to come and express their point of view, there is a time, place and manner argument to be made in terms of protecting the public safety. So my personal request was that they come back at some other time to express their point of view when tensions weren’t running as hot as they were at this particular time in the city of Portland. They declined that request, which was their right to do, and we made up for it by having a significant public safety presence.

How serious is the spike in hate incidents that you are seeing overall?

The Southern Poverty Law Center recently issued a report that shows the reports of hate crimes have increased significantly nationwide. There is data that shows that the same is true in the state of Oregon. And I can tell you anecdotally, we’ve had far more incidents of hate crime here in our community. We had a number of school children who were harassed recently. We have a multicultural festival – it’s predominantly African-American – called Good in the Hood and organizers were threatened through the mail and specific organizers were called out, and told that they and their families were in danger. And of course we had the situation on the [commuter train]. We’ve had several incidents of hate graffiti. So while we are a very progressive, open and welcoming community, we’re not immune to these same kinds of trends that are taking hold all across the country. There is no question that people espousing hateful points of view have been emboldened in recent months.

What are you doing to try to counteract that tide that you see?

The best thing I can do as the mayor of this community is encourage people to be civil, enforce the laws when people refuse to do so and continue to lead the dialogue around race and ethnicity in this community. We are becoming a much more diverse country. The city of Portland is becoming a much more diverse community. And we need to learn to work together to help win the future that we all want for our community and for future generations. 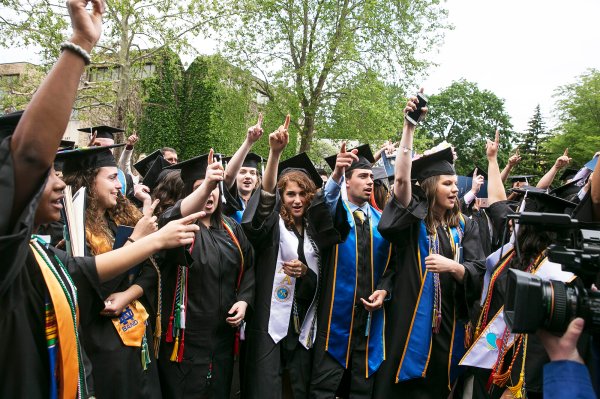