How Economic Reform Will Help Women Drive In Saudi Arabia

Ideas
By Fatimah S. Baeshen
Baeshen is a director with the Arabia Foundation

I recently watched Wonder Woman, and the overall theme of the movie hit home. One quote particularly resonated and reminded me of the battle Saudi women face for our rights…

The battle will never be fair.

We cannot approach it as if it is. Saudi society will transform: not because of government mandates or activism, but because of changes in the Saudi labor market and the unsustainable religio-cultural contradictions these transformations will create. Ultimately, economic reform will drive sociocultural change in Saudi Arabia — pun intended.

There is no official law in Saudi Arabia prohibiting women from driving, only one that requires a license to drive, which women cannot obtain. The ban originated from Saudi’s conservative religio-cultural tradition and, over the course of decades, evolved from observed tradition to full institutionalization. This occurred in 1991 when, following a female driving campaign, a prominent Saudi cleric issued a religious decree linking women’s driving to the promotion of ‘sinful’ practices, such as free mixing of the sexes, unveiling, etc.. As the ruling drew widespread support from Saudi’s large conservative religious base, the Ministry of Interior was compelled to endorse it. This is one example where activism backfired.

Women driving remains a social lightning rod. When asked about driving during a TV interview that aired on a Saudi network in April 2016, even the reformist Deputy Crown Prince Mohammed bin Salman said: “Saudi Arabia is not ready for women drivers… Women driving is not a religious issue as much as it is an issue that relates to the community itself that either accepts it or refuses it.”

He is right. Even if the government allowed women to drive tomorrow, Saudi society in aggregate would not be ready to accept it. Furthermore, given the tremendous economic and social changes currently being implemented from the top-down on what still remains a traditionalist society, it is likely that public sensitivity on the issue has never been more acute. Like a Facebook relationship status, it’s complicated.

Ridesharing services, such as Uber and Careem, have gained substantial market share in Saudi Arabia because the Kingdom’s growing ranks of professional women require an on-demand driving service that is both accessible and affordable (neither a taxi nor a private chauffeur). The success of these firms has in turn generated attention from Saudi men looking for gainful employment. While the Kingdom has typically depended on foreign labor for these types of positions, in the last three years there has been a visible shift; Saudi men have shown an increasing willingness to take blue-collar and service jobs. In transportation, the sharing economy’s emphasis on flexible hours, independence and supplemental income are especially appealing.

This transition in male attitudes, coupled with the growth in the number of Saudi women entering the labor market and the clear benefits of having a two-income household amidst a period of economic transformation are game-changers that will, eventually, undermine the prohibition on women driving.

Despite the obvious contradictions, the religious establishment’s narrative of how driving results in “mixing” of the sexes does not apply to female interactions with the millions of male chauffeurs and taxi drivers. Those drivers have by and large been foreigners, and as a result of their station as “servants,” they are essentially asexualized — they pose no social threat.

However, as Saudi men replace these foreigners, this rationalization no longer applies. Male Saudi drivers do not see themselves as and will not be tolerated being seen as “domestic help.” So Saudi men driving Saudi women creates precisely the situation the religious conservatives wish to avoid: the perfect environment for unrelated members of different sexes to “mix” in an enclosed space for an indefinite period of time.

This puts the government in a policy dilemma, which it will have to rectify without derailing economic reform initiatives. These dynamics are likely to lead to women getting behind the wheel. Given the economic targets of the country, including to increase women’s participation in the workforce and reduce national unemployment, the leadership will be obliged to cede to the conservatives and allow women to drive in order to preserve the sanctity of women and Islam, while continuing to generate jobs.

Perhaps not the way we planned to win the battle, but one we will most likely win.

I agree with the intention behind the actions of Lujain Al Houthlool, Manal Al-Sharif and dozens of other Saudi activists who link the right to drive to women’s liberation in the Kingdom. However, as a Saudi woman myself, I believe that the change-through-confrontation approach is counterproductive to achieving our collective goal; force is too often met with the strongest of cultural resistance.

Like Wonder Woman, we have to be relentless in our fight, but we also have to be strategic on the battlefield. 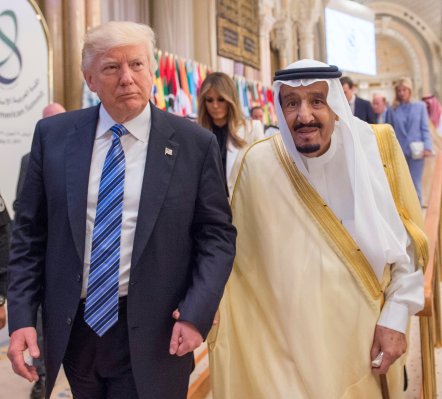 The Big Problem with President Trump's Record Arms Deal with Saudi Arabia
Next Up: Editor's Pick