The bathroom is the unsung hero of the airplane.

Particularly on a long-haul flight, this space provides relief to hundreds of passengers with very few breaks. All things considered, the airplane bathroom should be a much, much more disgusting place than it usually is.

We have the flight attendants to thank for that. Over the years, cabin crew have concocted a clever hack to keep things smelling fresh under less-than-ideal conditions.

If there’s a lingering smell in the airplane toilet, flight crew will brew a very strong pot of coffee and bring it with them while they clean the area. According to The Sun, the smell of the coffee will neutralize any unpleasant odors.

Basically, because the smell of coffee beans is so powerful, it will overtake all other smells in its vicinity. Once flight attendants learned this hack, many started keeping bags of old coffee grounds immediately next to the toilet.

Passengers who head to the bathroom with prior knowledge that they are about to commit a dastardly deed can ask a flight attendant for a bag of coffee grounds before they close the door.

Don’t worry — they’ll usually know what’s up and refrain from asking further questions. It’s the polite thing to do.

So if you smell coffee the next time you head into an airplane bathroom, you’ll know exactly what happened there moment before you walked in. 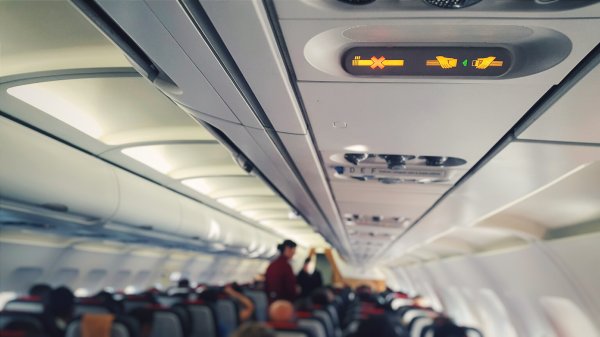 Here's What All Those In-Flight 'Dings' Really Mean
Next Up: Editor's Pick