Never Mind Who Wins. The Biggest Question in Georgia's House Race Is Who Turns Out to Vote

Apart from who wins, there’s one question that’s making both Democrats and Republicans pay close attention to a House election in Georgia Tuesday: who turns out?

With both parties preparing already for the 2018 mid-term elections, the question of which side is better motivated to show up in an off-year special election just months after the November presidential race is a serious one.

Though Republicans have won recent special elections in Republican strongholds in Montana and Kansas, the races were much closer than they have been in past years. Georgia’s election could be another test of Democratic intensity.

“Unfortunately, human beings learn from disaster,” Larry Sabato, Director of the Center for Politics at the University of Virginia, said. “For Democrats, there has been no greater disaster than the election of Donald Trump.”

Michael McDonald, Associate Professor of Political Science at the University of Florida, argues the higher-than-normal support for Thompson and Quist in heavily conservative areas indicates Democratic voters are becoming more engaged, which he attributes mostly to the “shadow of Donald Trump.”

“Even though the Democrat didn’t win in Kansas fourth Congressional district or the Montana at-large Congressional district, they outperformed what we would typically think a Democrat would do in those districts,” McDonald said to TIME. “So, what it appears then is that Democrats are highly engaged and the most likely explanation for that is a backlash against Donald Trump.”

However, Tyler Law, spokesperson for the Democratic Congressional Campaign Committee, believes Democratic candidates are over-performing for a different reason: the Republican health care bill, which was backed by only 21% of voters in one recent poll.

“People are watching what’s happening in Washington, and they’re clearly not happy,” Law said. “I think one thing to really train your focus on is the disastrous Republican repeal bill that the House passed.”

Montana Secretary of State Corey Stapleton cautions drawing conclusions from just a few special elections, however. He says that in the case of the Montana special at-large Congressional election, there are too many variables to analyze. “[The Montana special election] was [on a] strange date–a day before the long Memorial Day weekend–and you had extraordinary amounts of money coming in,” Stapleton, a Republican, said. “I would be really reluctant to try and connect dots because it was such a unique election.”

He would add, though, that the election was “to some extent a referendum against a newly elected president.”

But the high turnout may not necessarily lead to Democrats flipping seats in the future. McDonald argues that because Democratic voters are now becoming more engaged, Republicans are starting to turn out in higher rates as well.

“Interestingly, though, I think there’s a tipping point, where Republicans start becoming more engaged too,” McDonald said. “They see the Democrats engaged and Trump supporters want to rally behind him and they start turning out as well.”

Though, McDonald would add, Republican voter engagement is still not at the level of Democratic voters.

The Georgia race between Ossoff and Handel looks like it will follow the same theme as the special elections in Montana and Kansas–high turnout and an uptick in Democratic candidate performance in a Republican district. Most Democratic activists have decided to focus their support on Georgia instead of South Carolina, where strategists are doubtful Democrat candidate Archie Parnell can defeat Republican candidate Ralph Norman.

Like Montana and Kansas’ fourth Congressional district, Georgia’s sixth Congressional district has been dependably Republican for decades, though its demographic makeup is changing. (Former Speaker of the House Newt Gingrich held the seat from 1979 to 1999.) In the primary, which was held on April 19th, Ossoff nearly edged out a packed Republican field to avoid a run-off general election. (In Georgia, if a candidate claims 50 percent of the vote in the primary the candidate wins the seat outright and there is no general election.)

Currently, Ossoff holds a slight lead over Handel in multiple polls, though many believe the race to be a toss-up.

“It looks likely that we’re probably going to have a higher turnout rate in the Georgia sixth Congressional election than in the 2014 general election,” McDonald said.

Though these special elections are important, Democrats will have to wait until the 2018 midterm elections to regain power in any significant way. And while Democratic turnout has been up in elections so far, it will require more than high turnout to flip enough seats to gain back a majority in the House or Senate.

“[High turnout] is not going to be sufficient for the Democrats,” added Mcdonald. “It will help them some, but … it’s also going to be persuasion as well.”

For now, slowly chipping away at the Republican majority in Congress is what Democrats can look forward to.

“People were concerned after the Women’s March,” Law added. “Are we were going to sustain the energy? Are we going to keep showing up in force? And man, the skeptics have really been disproven on that one.

“It’s showing zero signs of slowing down. And in many cases, it’s ramping up.” 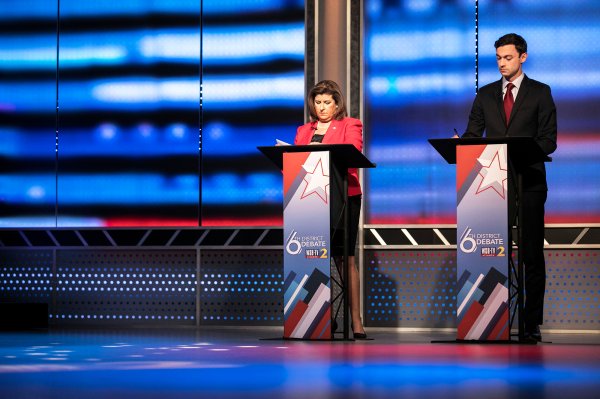