Is President Trump Under Investigation? Here's What We Know

When President Donald Trump abruptly fired James Comey last month, he wrote in the former FBI Director’s termination letter that he was appreciative of Comey telling him, on three separate occasions, that Trump himself was not under investigation — an assertion Comey confirmed in congressional testimony.

But the last time Comey assured Trump of that was March 30, and, as he acknowledged repeatedly in his testimony, he was always aware that could change. Now, it seems, it is indeed changing. But there are conflicting signals about what is actually happening.

The Washington Post reported on June 14 that Special Counsel Robert Mueller, who was appointed after Comey’s termination to oversee the Russia investigation, had widened his probe to examine if the President attempted to obstruct justice, or intentionally tamper with investigations surrounding himself or his associates.

After the report was published, the President subsequently acknowledged in a tweet, “I am being investigated.” On Sunday, however, a member of his legal team, Jay Sekulow, largely denied that, sparking a tense exchange with Fox News anchor Chris Wallace.

What has been reported about whether Trump is under investigation?

On June 14, the Washington Post reported that Mueller had expanded his investigation to determine if Trump had attempted to obstruct justice, and was interviewing senior intelligence officials — Director of National Intelligence Daniel Coats, Head of National Security Agency Mike Rogers, and Rogers’ former deputy Richard Ledgett — as part of that probe. The Post cited multiple unnamed sources familiar with those interview requests.

The assurances from Comey that the President wasn’t under investigation were apparently no longer applicable, according to the Post report. The New York Times also reported that Mueller was seeking interviews with Coats, Rodgers and Ledgett, although the report only described these interviews as an “indication” that Mueller was investigating if Trump obstructed justice.

Coats and Rogers both declined to discuss private conversations with Trump during congressional testimony earlier this month. But The Post reported that Coats had told associates Trump had asked him to intervene with Comey when he was still FBI Director, to take the heat off former National Security Adviser Michael Flynn, and that Trump had asked Coats and Rogers to publicly deny any evidence of collusion between Trump associates and Russia during the 2016 election.

Whether or not Mueller finds these reports to be valid will be hugely relevant to any finding of obstruction.

What has Trump himself said?

Two days after the Post reported Mueller was investigating Trump for possible obstruction of justice, the President seemed to acknowledge as much himself in an early morning tweet:

Trump’s tweet was most likely in reference to Deputy Attorney General Rod Rosenstein, whose memo he cited as justification for firing Comey, and who had appointed Mueller as special counsel. But Trump has also said he had decided to fire Comey before Rosenstein wrote a memo recommended him. Mueller operates with day-to-day independence of Rosenstein, but Rosenstein still oversees how the investigation is funded.

What has Trump’s legal team said?

Before Trump had tweeted he was under investigation, Mark Carallo, a spokesman for Trump’s personal attorney Marc Kasowitz, did not deny the Post report but questioned the legality of the leaking information about the investigation, calling it ” outrageous, inexcusable and illegal.”

He did tell Face the Nation’s John Dickerson and Fox News’ Chris Wallace however, that he hadn’t been notified of an investigation

“No one’s notified us that he is [under investigation],” SSekulow told Wallace. “So I — I can’t read people’s minds, but I can tell you this, we have not been notified that there’s an investigation to the president of the United States.”

Sukelow subsequently did tell Wallace that Trump was being investigated by the Special Counsel when he was asked, in reference to Trump’s tweet, if the President thought Rosenstein had done anything wrong. Sekulow responded by citing what he called a “constitutional issue,” with this situation, explaining that Trump had taken action to fire Comey partially based on recommendations from Rosenstein, and is now facing an investigation from the Department of Justice, because that’s who Mueller reports to.

A spokesperson for Kasowitz did not return request for comment about Sekulow’s interview.

When Wallace pointed out that Sekulow had just admitted the President was under investigation, Sekulow reiterated that he had not been notified of anything.

“I do not appreciate you putting words in my mouth,” he told Wallace. 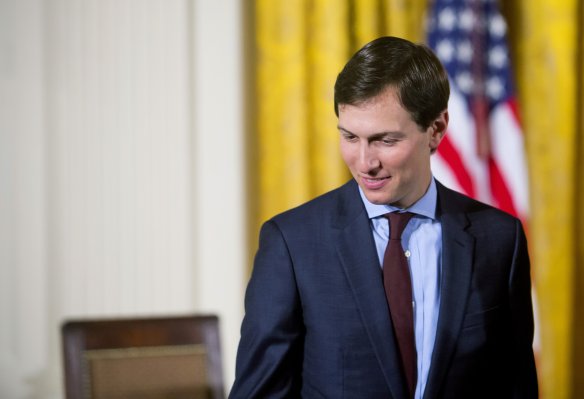 Jared Kushner Is Going to the Middle East
Next Up: Editor's Pick