The Bellas Are Back in Pitch Perfect 3 Teaser Trailer

Pitch Perfect 3 doesn’t roll into theaters until this December, but it’s not too soon to start getting warmed up for the a capella-focused movie.

“We’re taking you on a global tour with the Bellas,” director Trish Sie says as she gives viewers a behind-the-scenes tour of the film’s productions in a new teaser trailer for the film. And based on some of the footage in the trailer, it would appear that the Barden Bellas are indeed taking their show on the road — or at least the seas. There are shots of Anna Kendrick and some of her costars jumping into the water, DJ Khaled hanging out with some military members, and the Bellas decked out in camo.

New cast members include Ruby Rose, Andy Allo, and John Lithgow. Fans can catch a glimpse of the Trial and Error actor in the teaser, as Sie notes he and actress Rebel Wilson are like “peas in a pod.” Along with Kendrick and Wilson, all the rest of the original Bellas will be returning, including Brittany Snow, Anna Camp, Ester Dean, Chrissie Fit, Hana Mae Lee, and Hailee Steinfeld, who made her Pitch Perfect debut in the 2015 sequel. 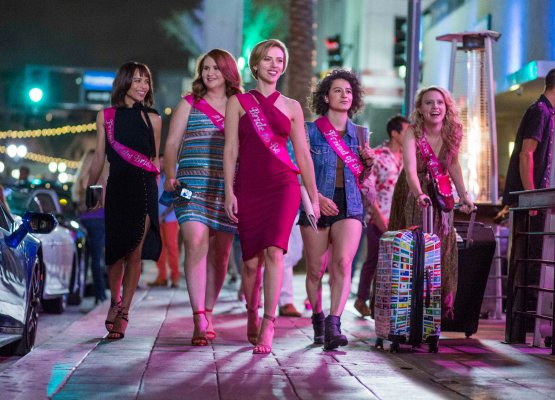 The Real Reason Why Bachelorette Parties Are a Thing
Next Up: Editor's Pick