What to Know About the Terror Attack Near a London Mosque

By Kevin Lui and Kate Samuelson

A vehicle crashed into pedestrians near a mosque in Finsbury Park in north London shortly after midnight on Monday, injuring nine people. Police arrested a 47-year-old man who was driving the vehicle when it veered off the road and collided with a crowd of Muslims who were leaving the mosque after Ramadan prayers.

Police declared the attack a terrorist incident, British Prime Minister Theresa May confirmed on Monday, and she said they had responded within a minute. The collision bookends a tragic month in the U.K., which has now seen three separate terror attacks and a fatal fire in less than four weeks.

Authorities received reports that a van had collided with pedestrians on Seven Sisters Road in the Finsbury Park neighborhood of northern London shortly after midnight Monday. The crash occurred near a mosque and Muslim community center, where worshippers had congregated after prayer services marking the holy month of Ramadan.

The police department said officers and emergency responders arrived and began tending to casualties within minutes. One man was pronounced dead at the scene. He was already receiving first aid when the attack happened, the Metropolitan Police said. It’s not yet clear if his death was caused by the attack.

Nine people were taken to three hospitals and around two others were treated on the site for minor injuries. “The first of our medics arrived within 14 minutes of the first emergency call,” said London Ambulance Service Deputy Director of Operations, Peter McKenna, in a statement. “Our priority was to assess patients and ensure that they were treated and taken to hospital as soon as possible.

What do we know about the driver?

The 47-year-old man driving the vehicle was detained by bystanders before police arrived, according a police fact-sheet. He was taken to a hospital for an evaluation, and was placed in police custody immediately upon his discharge.

The man was initially arrested for attempted murder and taken to a south London police station where he remains in custody. He was later charged with the commission, preparation or instigation of terrorism including murder and attempted murder, police confirmed in a statement.

Police believe the man acted alone. “We are of course investigating all the circumstances leading up to the attack,” the Met Police’s statement said. “There were no reports of any people having suffered knife injuries.”

Eyewitnesses told local media and religious leaders that they believed the driver had deliberately veered off the road, according to the Associated Press.

How have authorities responded?

Police and medics arrived quickly on the scene, and the incident is now being investigated by the U.K.’s Counter Terrorism Command. According to the AP, police say the attack had hallmarks of a terrorist incident. Additional police resources have been dispatched to the area to bolster security. No other suspects have been identified or are being investigated.

Prime Minister Theresa May spoke about the incident in Downing Street Monday morning. After saying that her thoughts and prayers were with the family and friends of the man who died and of those who were injured, May thanked the police and emergency services “for responding once again as they always do, with great professionalism and courage.” She added that officers were on the immediate vicinity when the attack unfolded and responded within one minute.

May said that the extra police resources have been deployed and the government is reviewing its counter-terrorism strategy and will establish a new commission for countering extremism “to help fight hated and extremism in the same way that we have fought racism.”

She added: “This was an attack on Muslims near their place of worship and, like all terrorism in whatever form, it shares the same fundamental goal. It seeks to drive us apart and break the precious bonds of solidarity and citizenship that we share in this country. We will not let this happen.”

Opposition leader Jeremy Corbyn released a statement shortly after the incident, saying he was “totally shocked,” and that his thoughts were with the people and community affected by the “awful incident.”

London Mayor Sadiq Khan referred to the crash as a “horrific terrorist attack.” Khan posted a statement on social media extending sympathies and urging Londoners to remain calm as police investigate. “My thoughts and prayers are with everyone affected,” the statement read. “I am grateful to our emergency services, who responded quickly and have been working on the scene throughout the night.”

“Londoners have been hit with a series of attacks and have been nothing short of heroic,” she said in a statement.

How has the religious community responded?

The Muslim Council of Britain, the largest umbrella body representing Muslims in the U.K., has condemned the incident as a “terror attack” on worshippers. The group’s secretary general, Harun Khan, said in a statement that eyewitness accounts suggest “the perpetrator was motivated by Islamophobia.”

“Many will feel terrorized, no doubt be angry and saddened by what has taken place tonight,” Khan’s statement read. “We urge calm as the investigation establishes the full facts, and in these last days of Ramadan, pray for those affected and for justice.”

The Muslim Welfare House, an Islamic center near the area where the attack happened, said that the Muslim community in the area is “horrified at this incident and is concerned and shocked at the events,” adding that the group has “worked very hard over decades to build a peaceful and tolerant community here in Finsbury Park and we totally condemn any act of hate that tries to drive our wonderful community apart.”

“All of our efforts should be towards getting justice for the victims and ensuring our community stays the diverse, tolerant and welcome place we know it to be,” the statement continued.

The Sikh Federation U.K. has also weighed in on the attack, calling for “an honest dialogue and a fundamental shift in the way government tackles all forms of hate and terror” following the string of terror attacks in the past three months.

“Hate and terror must be stamped out by directly confronting all those who promote an ideolofy and philosophy based on hate and terror,” the group’s chair Bhai Amrik Singh said in a statement.

The Archbishop of Canterbury Justin Welby released a statement describing the attack as “appalling” and “an attack on us all and on the culture and values of our country.”

“At a time when we are all grieving the loss of so many precious people in London and Manchester, this brutal attack can only compound the trauma,” he said. “Violence only begets more violence – it serves only the interests of those who would terrorise others.” 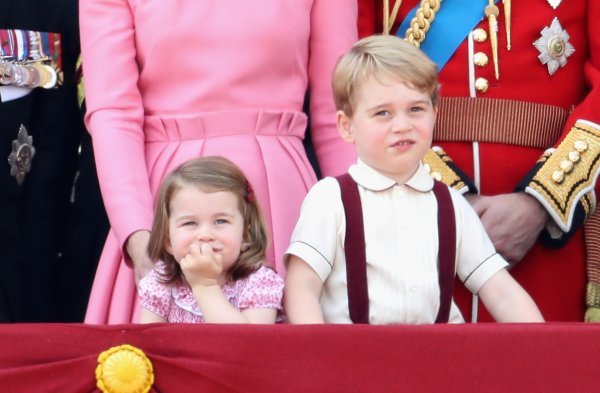 Prince George and Princess Charlotte Steal the Show on the Queen's Official Birthday
Next Up: Editor's Pick