Saturday is the annual Trooping the Color in London, which marks the formal celebration of Queen Elizabeth II’s “official” birthday. (Her actual birthday is April 21 — you can learn about why she has two birthdays here.)

As usual, all your favorite royals were there to celebrate the 91-year-old monarch’s milestone.

The Queen and Prince Philip, who turned 96 last week, kicked things off in a carriage.

The Queen wore a powder blue Stewart Parvin outfit and a matching Philip Somerville-designed hat. She also wore her Brigade of Guards Badge, which she wears every year. The Duke of Edinburgh wore morning dress instead of full uniform, and sports a Household Division tie, Garter Star and Medals.

The Prince of Wales, riding horse George, wore the Guard of Honour uniform. The Duke of Cambridge wore his Irish Guard’s Tunic with Jubilee medals, sword and bearskin, and rides Wellesley.

Before the event kicked off, the Queen and Philip led a minute of silence on the Place grounds. The Queen also issued a solemn but ultimately uplifting message to people of Great Britain following a month of tragedies — including two terrorist attacks and a deadly apartment tower fire.

“Today is traditionally a day of celebration. This year, however, it is difficult to escape a very’ sombre national mood. In recent months, the country has witnessed a succession of terrible tragedies,” she said.

“As a nation, we continue to reflect and pray for all those who have been directly affected by these events,” the Queen continued. “During recent visits in Manchester and London, I have been profoundly struck by the immediate inclination of people throughout the country to offer comfort and support to those in desperate need.

“Put to the test, the United Kingdom has been resolute in the face of adversity. United in our sadness, we are equally determined, without fear or favor, to support all those rebuilding lives so horribly affected by injury and loss.”

Prince Harry, Camilla, Duchess of Cornwall and Catherine, Duchess of Cambridge attend the annual Trooping The Colour parade at the Mall on June 17, 2017 in London, England.
Karwai Tang—WireImage

After the parade, the entire royal family gather on the balcony of Buckingham Palace for the “flypast” of roaring jets. And, of course, that’s when we’ll get a glimpse of Prince George and Princess Charlotte.

Trooping the Color brings out nearly every member of the royal family to celebrate the Queen’s birthday with the rest of the U.K. And it is always a day for memorable candid moments — from Prince George wagging his tongue in the window in 2015 to Prince William getting scolded by his granny the Queen for leaning down to talk to George in 2016. — With reporting by Phil Boucher 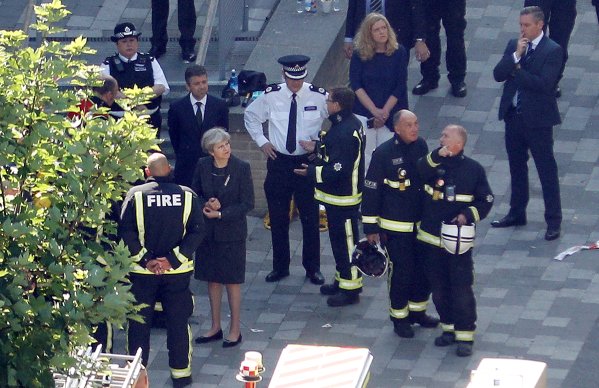