How Helmut Kohl Wanted to Be Remembered

In July of 1990, about a half a year after the fall of the Berlin Wall, Helmut Kohl — the German politician who has died Friday at 87, was then Chancellor and met with Mikhail Gorbachev at a resort in the Russian countryside. With the wall toppled, a thaw was in Europe’s political air, but the shape of what was to come was still hazy and unsettled. What would a world with a reunified Germany look like?

After a few days of talk, the two leaders announced that they had figured out the answer, and that it was a hopeful compromise that would allow resolution to move ahead at full speed. President George H.W. Bush was surprised by how quickly they were able to come to that agreement, but pleasantly so. Kohl’s rise to power was somewhat rocky: when he became Chancellor of West Germany in 1982, TIME noted that he faced “vigorous opposition” inside his country and that his rise came out of “weeks of virtual paralysis and political infighting.” But the 1990 announcement was seen as proof that he had become one of the world’s most successful diplomatic players.

In a story about the agreement, accompanied by a cover that called him Mr. Germany, TIME expressed optimism about how he would use that talent — and captured the leader’s hope that he would one day be remembered for it:

And, more than a quarter-century later, as the world remembers Kohl, his wish has largely been granted: his time in office, and his life in general, has remained largely defined by his role in uniting Germany — and thus helping to bring the Cold War to a close.

Read the full June 1990 Q&A between TIME and Helmut Kohl: Driving Toward Unity 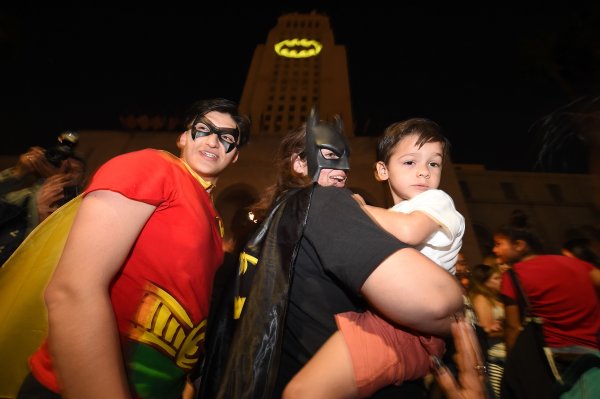 Bat-Signal Shines in L.A. to Honor Adam West
Next Up: Editor's Pick