Why the Dalai Lama's University of California Commencement Address Is Controversial

The Dalai Lama’s commencement address at the University of California, San Diego this weekend has stirred some controversy on a campus where 12.5% of the students are from China.

A total of 50,000 tickets for the Dalai Lama’s two speeches on campus — a public address on Friday and a commencement address on Saturday — sold out within hours, the San Diego Union-Tribune reported. But more than 3,500 students at the university are Chinese citizens, and the Chinese Students and Scholars Association (CSSA) at the university raised objections to the Dalai Lama’s selection soon after it was announced earlier this year.

Chinese government officials view the exiled Tibetan spiritual leader as a “separatist,” accusing him of spurring division because he previously advocated for full Tibetan independence. Chinese officials also objected to former President Obama’s meeting with the Dalai Lama last year. In a 2014 interview with TIME, the Dalai Lama, who was awarded the Nobel Peace Prize in 1989, said he wants to reach a middle ground with China. “We are not seeking independence,” he said. “We are seeking general autonomy.”

A statement by the CSSA in February argued that the Dalai Lama has had a divisive influence in Chinese politics. In response, the International Campaign for Tibet accused the student group of “doing the work of the Chinese government.”

UC San Diego student Ruixuan Wang wrote an op-ed for the student newspaper in February that voiced the views of those who oppose the speaker.

“Commencement is a landmark of our life. Our family members are coming all the way from China, flying for more than 10 hours to celebrate with us. The Dalai Lama, as a political icon, is viewed differently in our country,” Wang wrote. “We want to spend a fantastic time with our family during the commencement, but his presence will ruin our joy. What we want to say is that objectively, he will be an excellent speaker for the commencement. Nonetheless, culturally speaking, his selection to be a presenter is inappropriate in such a situation, considering how many Chinese students and their families are going to attend this commencement.”

But the university has stood by its decision to host the Dalai Lama, who previously visited the school in 2012.

“A man of peace, the Dalai Lama promotes global responsibility and service to humanity,” Chancellor Pradeep K. Khosla said in a statement. “These are the ideals we aim to convey and instill in our students and graduates at UC San Diego.”

During his speech on Friday, the Dalai Lama called for mutual respect and understanding.

“This century should be the century of dialogue in order to create a century of peace,” he said, encouraging people to work to stop division and violence throughout the world. “You have the responsibility to solve this, not through prayer but through action.”

His commencement address on Saturday is titled “The Value of Education, Ethics and Compassion for the Well-Being of Self and Others.” 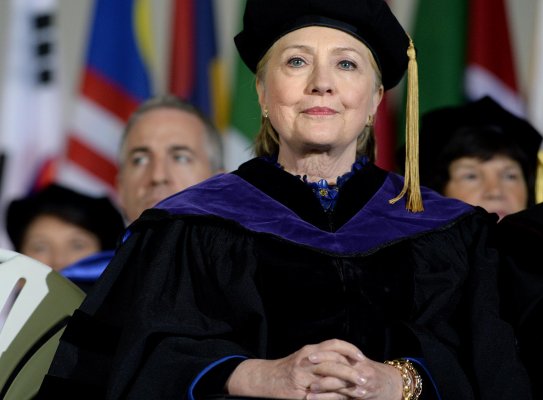 The Best Commencement Speeches of 2017
Next Up: Editor's Pick