How My Children Reconnected Me With My Father

Jamie Malanowski
Ideas
By Jamie Malanowski
Malanowski, a former editor at TIME and author of Commander Will Cushing: Daredevil Hero of the Civil War, is a speechwriter for New York Governor Andrew Cuomo.

My sister is nine years older than me, and during most of our father’s life, she enjoyed a closer relationship with Dad than I did. She would refer to things they had done together when she was little, fun things like playing make believe games on the living room floor.

I didn’t have the same relationship with him. Sure, my Dad did some things with my younger brother and me, occasional day trips and outings to ball games. But mostly, my dad worked — days at a factory, three or four nights a week at a market — and often when we saw him, he was gruff, short, removed.

It seemed that my sister and I knew two different men. And in fact, we really did. A significant thing happened between the time when my sister was in the heart of her childhood, and when I was in mine. I had a brother who died.

He was a year younger than my sister. And when he was 15 — when she was sixteen and I was seven, and my dad was 45 and squarely in the middle of his life — my brother developed a disease called aplastic anemia.

In those days, in the early sixties, if a young man was interested in becoming a priest, he attended school away from home at a seminary. It was a pretty intense experience for those boys; they came home on only holidays and during the summer, not even on weekends, and family visits were limited if not outright discouraged. Starting sometime after Christmas in my brother’s second year, in the early part of 1961, he began to call home and complain of having a lot of bloody noses and headaches and a rash. He had gone to the infirmary, but whomever he saw just gave him aspirin.

When he came home at Easter, my parents took him to the doctor, who sent him immediately to a hospital. He never came out. Aplastic anemia was destroying his ability to make blood cells and platelets. He was bleeding internally. He was dead in three weeks.

My parents were devastated. Not for years, really, did their grief abate. One of the ways my father coped was to work more. He took the second job. He increased his overtime. Very simply, he was around less. And when he was around, he more orbited his family than functioned as a part of its nucleus. Often when he tried to fit in, it was awkward. It took an effort. By the time I was a teenager, I wasn’t much interested in trying.

Eventually, I went to college. I met a girl and got married. We put off having a family for many years, and not until I was 36 was my first daughter born. She was my parents’ first grandchild, and both Mom and Dad were thrilled to see the day they had started to doubt would come.

By then, Dad was in his early seventies. I don’t remember Dad doing much with our daughter when she was a baby, but once she became mobile, he shocked me — he played with her. He got on the floor. He played with Barbie dolls, built Lego towers, laid out Thomas the Tank Engine tracks. The grouchy, distant man I knew pretended to be a crash victim and allowed her to bandage him until he resembled a mummy. He pushed her on swings, strolled through petting zoos with her and went on roller coasters, which neither of her parents would do.

He did something else. Having pretty near lost his hearing to 36 years in a factory, Dad spoke loudly. “WANT SOME COFFEE?” “HAVE YOU SEEN THE SPORTS SECTION?” He spoke that way to everyone. Including my daughter. For a while. Then he realized that his loud voice frightened her. So he did for her what he did for no one else: He lowered his volume.

When our second daughter was born, it was much the same. Dad played with both of them.

Along the way, something unexpected happened: He and I grew closer. Part of it, I’m sure, was that I was more mature, and that since I had become a father, I more clearly appreciated all that he and my mother had done for me and my siblings. And what they had lost.

But part of it, too, was that he had changed. Softened, maybe. Opened himself up, for sure. For too many years after the death of my brother, Dad lived on the outskirts of his family. When my children were born, he made an effort to try to be closer, and he appreciated that my wife and I not only let him, but welcomed him and happily made a place for him.

The last good memory of my Dad before he died was at my daughter’s high school graduation. We made a party for the occasion, strung up lights in the back yard, set up tables. Many of our friends came. He had met most of them over the years, and they all sat with him and spoke to him. I remember him sitting there on that warm June night with a very satisfied look on his face, the happy paterfamilias, the man my sister knew as a girl, the man who through the grace of my children I finally got to know. 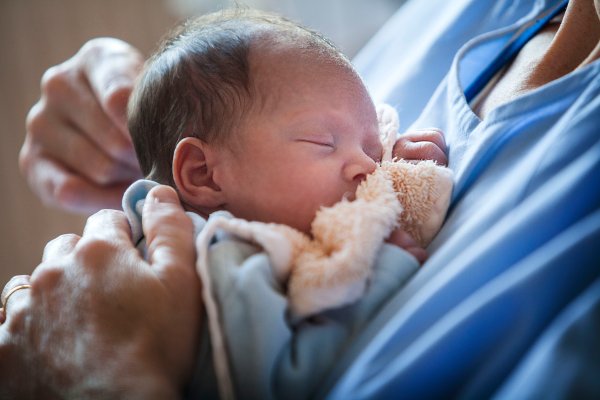 Most Premature Babies Do Well In School Later On
Next Up: Editor's Pick