Los Angeles turned out in force Thursday night to honor the late actor Adam West, best known for playing Batman in the classic television series based on the DC Comic, who passed away after a battle with leukemia last week at the age of 88.

Crowds amassed outside City Hall, where the iconic “Bat-signal” glared across the tower’s façade. The symbol, flashed across the fictional skyline of Gotham city by police to summon the superhero, led fans of all stripes to a tribute event organized by L.A. Mayor Eric Garcetti.

According to a press release by D.C. Comics, Garcetti was joined by the real-life L.A. police chief Charlie Beck and other “Bat-guests” for a switching-on ceremony. Once the signal was up, Garcetti tweeted a photo with the message: “Remembering the #BrightKnight,” as the superhero was sometimes known.

West won adoration for his defining portrayal of the caped crusader, alias millionaire Bruce Wayne, in the 1960s Batman TV series and the 1966 Batman: The Movie. Later in life he sometimes starred in roles that riffed on his on-screen superhero persona.

Tributes continue to flow in for the actor. Family Guy, the Fox animated series on which West voiced the mayor of Quahog, will re-air an episode featuring him on Sunday. 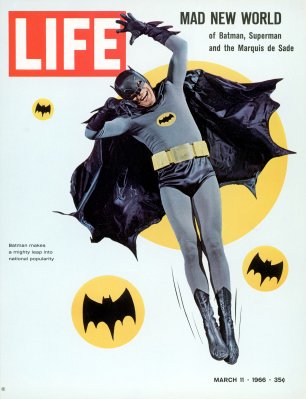