Tens of Thousands Turned Out for the Congressional Baseball Game

Turnout soared for the Congressional Baseball Game Thursday, as Washington residents and Capitol Hill staffers sought to show unity in the wake of a devastating shooting.

More than 20,000 tickets were sold for the annual charity event, raising more than $1 million for area charities. The stands at Nationals Park on Washington’s south side were filled with Americans looking to honor the victims of a shooting in Alexandria, Va.

“I came here to support everybody at the Capitol,” Clara Sachs, a tour-guide for “Need to See in D.C,” said. “They’re all representing us. They’re all fighting for us because they love our country. They may disagree but it’s because they want the best for our country. We’re all Americans first.”

For people like Sachs, who is a Democrat, the annual baseball game between Democratic and Republican lawmakers was a way to avoid partisan bickering and express solidarity with her country over the attacks that occurred yesterday.

Before the game started, both teams came together for an expression of unity. They huddled together at second base for a prayer for the victims of the tragedy, which includes their colleague, Republican Majority Whip Steve Scalise.

After the prayer was over, there was a moment of silence and a videotaped message from President Trump.

“By playing tonight, you are showing the world that we will not be intimidated by threats, acts of violence or assaults on our democracy,” Trump said. “The game will go on.”

Then, Special Agent David Bailey, one of the Capitol Police officers wounded in an attack on the Republican team’s practice, hobbled out to the pitcher’s mound with crutches and threw out the first pitch to a roaring applause.

Once the game started, the unified cheers turned to back and forth applause for each team. Both teams had their own fan section–on the third base side sat the Democrat fans, on the first base side were the Republican supporters. Nonetheless, for many fans the competition was more a way to foster camaraderie.

“I’m a Democrat and this is a fun game to come to,” said Jared Weaver, who brought both his daughters to the game. “I think it’s great they decided to keep the game going. It was a horrible tragedy and I hope the victims come out fine. But I think it’s great for everyone to come together to celebrate this game and have fun.

Dennis Pritchett, a civil engineer, arrived at the ballpark wearing a polo with the American flag and a picture of a bald eagle emblazoned on the front. “After what happened yesterday, I just wanted to show my solidarity,” Pritchett, a Republican, said. “We’re one nation. We’re all together. We should all be working together for the good of the nation.

“I don’t care who wins. If it’s not the Baltimore Orioles, I don’t care.”

But the night was not without occasional showings of partisan animus. Some fans avoided their rival party’s section. Jon Pinkus, 66, sat in the Democrat fan section wearing a “Dump Trump” shirt and holding a copy of the Christopher Steele dossier, which includes allegations of Trump’s ties to the Russian government. He said he brought the copy of the dossier to “look at it while the Republicans are batting.”

“[Republicans have] made their bed and crawled in bed with a sociopath and a liar,” Pinkus said. Though Pinkus would also say that he was at the game to “honor what happened yesterday.”

Rep. John Lewis was also among those in the crowd. Sitting among the sea of blue in the Democrat fan section, Lewis felt he needed to come to express solidarity for the victims of yesterday’s shooting.

“I decided [to come] in light of what happened yesterday,” Lewis said. “I felt like I had to be here to show my support for the people and players and show them we’re not afraid. We have to be brave and strong.” 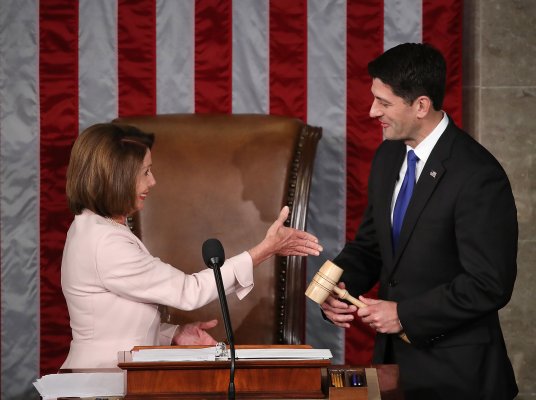 Paul Ryan and Nancy Pelosi Talk Unity After Shooting
Next Up: Editor's Pick