'Most of What We Actually Pass Is Bipartisan': Paul Ryan and Nancy Pelosi Talk Unity After Shooting

House Speaker Paul Ryan and House Minority Leader Nancy Pelosi spoke about the importance of unity in their first-ever joint interview on Thursday in the aftermath of Wednesday’s shooting at a baseball practice for the annual Congressional Baseball Game.

“It’s a partisan, polarized country,” Ryan told CNN’s Jake Tapper on Thursday during the Congressional Baseball Game. “What we’re trying to do is tone down the rhetoric. We can have different ideas without being vitriolic, without going to such extremes.”

Pelosi agreed, saying that both sides feel strongly, but that does not excuse any action like the one that took place this week. “I always say you can be passionate in your beliefs but have to be dispassionate in how you proceed,” she said.

House Majority Whip Steve Scalise and three other people were injured when a gunman opened fire on a baseball field in Alexandria, Va. where Republican members of Congress were practicing Wednesday morning. Capitol Police shot the gunman, and all those injured were taken to the hospital.

After the shooting, authorities discovered the gunman had posted anti-Republican and anti-President Trump messages on social media, prompting a discussion about the extreme political rhetoric that has dominated the past year.

When asked about the partisan divide on Thursday night, Ryan and Pelsoi emphasized that there is more cooperation than people think.

“By the way, there is a lot that we do do together. We just passed landmark veterans legislation last week, We worked together on the funding bill for government to help the military,” Ryan said.“Most of what we actually pass is bipartisan. It’s the stuff that’s not that’s controversial or that’s very much in disagreeing with each other that gets all the press attention.”

Pelosi again backed up Ryan, adding: “what’s newsworthy is what is controversial.”

Laughing with Ryan, Pelosi also said that while she enjoys the annual rivalry between the Democratic and Republican baseball teams, “tonight we’re all on Team Scalise” to honor the Congressman who remained at the hospital in critical condition and could not participate in the game. 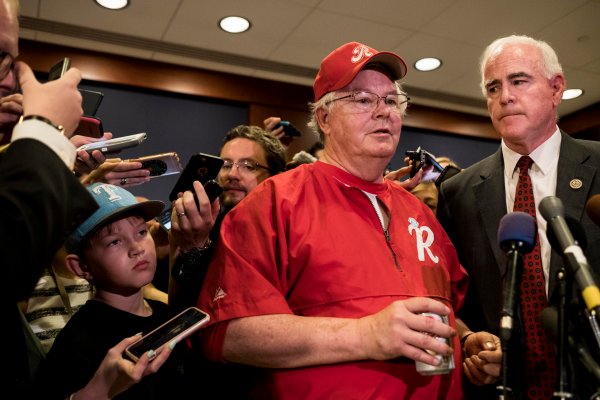 Congressional Baseball Game Raises More Than $1 Million for Charity in Wake of Shooting
Next Up: Editor's Pick