It’s hard enough being a woman filmmaker these days, but consider the plight of the woman filmgoer. It took years to get a big-budget Wonder Woman vehicle, and if you really must have role models in your movies, she’s probably not a bad one. But comedies in which women behave really badly—like 2016’s Bad Moms or Absolutely Fabulous: The Movie, or the more recent Snatched—have become the happy-hour cosmo of moviegoing. They’re plentiful, and supposedly just the ticket for women looking for a “girls’ night out” picture, just something fun to see for kicks. But if they’re supposed to be just a diversion, why—one after another—do they torture us with so many questions? Am I supposed to like this? Is this supposed to be funny? Does this really represent what Hollywood thinks most—or even just many or some—women really want from big-screen entertainment?

Rough Night, directed and co-written by Lucia Aniello—who has also written and directed numerous episodes of Broad City—is the latest entry in the “women whooping it up” genre, and it doesn’t make any of the above questions easier to answer. The movie—co-written by Paul Downs, Aniello’s boyfriend and writing partner, who also appears in the picture—is at its best when it catches the precise crosscurrent between sleazy and breezy. Scarlett Johansson is Jess, who’s launching a bid for state senator—she’s also about to be married, an adventure that just might be scarier than running for public office. Her old college clique—hoity-toity real-estate diva Blair (Zoë Kravitz), kooky activist Frankie (Ilana Glazer, of Broad City) and randy, insecure teacher Alice (Jillian Bell)—are spiriting her off to Miami for one last bachelorette weekend. They don’t know that she has also invited Pippa (Kate MacKinnon), a college friend they don’t know—Jess met her while spending a year abroad. Pippa is Australian, a loopy good-time girl with an Earth-mother streak, and her accent is a wild ocean of exaggerated rolling vowels. She barges into the movie in an assortment of tropical-printed rompers and maxi dresses, and she gets the movie’s best lines—or maybe she only makes them the best, unreeling them like crazy-colored party streamers.

The opening third of Rough Night is the best part of the movie and also the most predictable: The women get to Miami and commence partying, hard, immediately. Why is it funny when Frankie scores some coke and the women, at first reluctant to partake (one of them is running for public office, after all), end up descending upon it like gulls fighting for a scrap of fruit on a beach? Somehow the loose, coarse nuttiness of it works. There are props, including funny glasses with a fake penis where the nose should be. There’s a male stripper—make that two male strippers, at least in the literal sense that two brawny guys end up stripping down. But when the movie takes a sort-of dark turn into black-comedy territory, it starts to fall apart. The new, supposedly outrageous scenarios just aren’t as funny as the stock women-gone-wild gags. Ty Burrell and Demi Moore show up in tiny roles, as a kinky, predatory couple, but their oily come-ons are more limp than they are slippery.

The idea behind Rough Night isn’t bad by itself, and it’s fun to watch Johansson cutting loose in a comedy for a change. The picture also offers a few sight gags that are pure, dumb genius: they just work. (The sight of Downs, as Jess’ fiance, gingerly and acrobatically polishing the windshield of an eighteen-wheeler—did I mention he’s wearing a diaper?—isn’t something you’re likely to forget soon.) But Rough Night tries hard to capture the pleasurably profane, uncorked spirit of Broad City and doesn’t quite succeed, maybe because the joys of the show lie in how casual and intimate it is. Its glimpses into believable neurotic behavior among women are larkish and offhand—but blown up for the big screen, they’re not quite enough to fill it. I laughed a few times at Rough Night, often at MacKinnon and at least once at Downs in his diaper. And really, as Hangover-style dumb entertainments go, it’s certainly good enough. Which isn’t to say it’s anything close to what what women want. 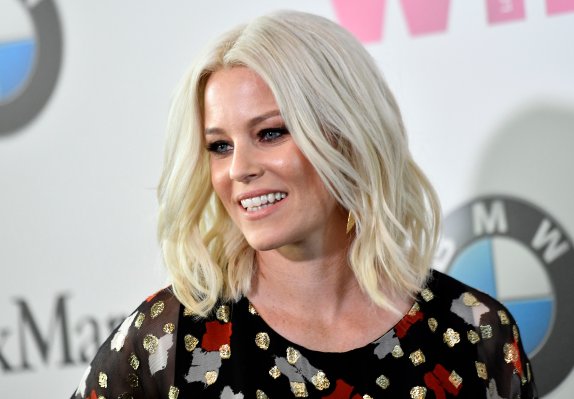 Elizabeth Banks Makes an Important Point About Hollywood Sexism—With a Crucial Oversight
Next Up: Editor's Pick