Bachelor in Paradise: What to Know About the Incident That Halted the Reality TV Show

Filming of Bachelor in Paradise, a reality TV spinoff of the popular The Bachelor series, was suspended last week over allegations of misconduct on the set, production officials said.

The two cast members involved — Corinne Olympios and DeMario Jackson — broke their silence this week, releasing conflicting statements about what unfolded during an apparent sexual encounter at the secluded Mexican beachside resort where the show was filmed.

Olympios on Wednesday described herself as a victim and said she is living out her “worst nightmare.” Soon after, Jackson said his “character and family name has been assassinated.” Both have retained legal advisers, as the fate of the ABC show hangs in the balance.

Here’s what to know about the Bachelor in Paradise controversy:

Details surrounding the incident are unclear. Warner Bros., which produces Bachelor in Paradise, only said there were “allegations of misconduct on the set” in Mexico. The company confirmed it has suspended production and has launched an internal investigation into the claims. “Once the investigation is complete, we will take appropriate responsive action,” it said in a statement.

Olympios said “something bad obviously took place” the night of June 4, although she did not offer further details. She also did not name Jackson in her statement and said she has little memory of the incident.

In Bachelor in Paradise, which is in its fourth season, more than a dozen male and female contestants who were unlucky on previous The Bachelor and The Bachelorette seasons get another chance to find a partner in Mexico. The cast members live with each other in a beach house for weeks and get booted off the show if they are unable to form a solid relationship or at least temporarily pair off with one another. Alcohol and dates are provided on set.

After news broke of the halted filming, Bachelor in Paradise host Chris Harrison urged fans of the franchise to be patient and not to listen to rumors until the investigation is complete. “There are a lot of competing details in the various press accounts of the incident. And there’s a lot of misinformation out there too,” he said in a statement, according to USA Today. “I know in this day and age we want and even expect immediate answers but in this case it’s just not possible.”

“It is my sincere hope that we can come to a quick resolution on this and get back to work very soon,” Harrison added.

What does Corinne Olympios claim?

Olympios, a 25-year-old online business owner from Miami, said she is suffering from “physical and emotional trauma” after the night in question. “I am a victim and have spent the last week trying to make sense of what happened,” she said in a statement to PEOPLE. “Although I have little memory of that night, something bad obviously took place, which I understand is why production on the show has now been suspended and a producer on the show has filed a complaint against the production.”

Olympios, who appeared on The Bachelor earlier this year, is considered one of the more controversial recent cast members, and was characterized as the villain of the season. The then 24-year-old contestant made headlines for saying she still had a nanny. In one episode, she got close to Nick Viall during a pool photoshoot — prompting negative comments from other contestants.

Olympios was not initially identified publicly as part of the incident that halted production on Bachelor in Paradise, until she spoke out in a statement this week.

“As a woman, this is my worst nightmare and it has now become my reality,” Olympios said. “As I pursue the details and facts surrounding that night and the immediate days after, I have retained a group of professionals to ensure that what happened on June 4 comes to light and I can continue my life, including hiring an attorney to obtain justice and seeking therapy to begin dealing with the physical and emotional trauma stemming from that evening.”

What does DeMario Jackson claim?

Jackson denied any wrongdoing in a statement he released shortly after Olympios went public. “It’s unfortunate that my character and family name has been assassinated this past week with false claims and malicious allegations,” he said in a statement to PEOPLE. “I will be taking swift and appropriate legal action until my name is cleared and, per the advice of legal counsel, will be seeking all available remedies entitled to me under the laws.”

The 30-year-old executive recruiter was one of the many men vying for Rachel Lindsay’s hand in marriage on the current season of The Bachelorette. Jackson was kicked off early on in the season. 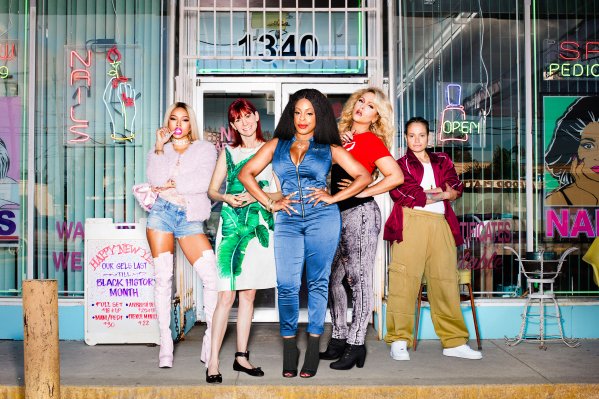 On TNT's New Soap, Utopia Among the Manicurists
Next Up: Editor's Pick