President Donald Trump turned 71 years old on Wednesday, and nearly every late-night television host had something to say about it.

“I wanted to give Donald something very special,” Colbert said. “After all, as a late-night host, he’s given me so much.”

Colbert then showed an iTunes gift card (“the exact same thing you give someone you don’t really know”), a small pair of gloves and a brown paper bag labeled “candle” with some kind of wet substance inside.

“Let’s just say it’s pungent,” Colbert said of the “candle.” “Don’t open up — I’ll light it for you and leave it on your doorstep. Just make a wish before you stomp it out.”

Though Colbert typically doesn’t go a night without poking fun at the president, other late-night hosts like James Corden, Jimmy Kimmel, Trevor Noah and Seth Meyers also joined in.

“Happy birthday to President Trump, who turns 71 today,” Meyers said on Late Night. “So the president is a man in his 70s who wants a golf score in the 60s, his country in the ’50s and a wife in her 20s.”

On Jimmy Kimmel Live!, Jimmy Kimmel spliced together footage of Trump praising himself and his policies at rallies and speeches across the country, setting it to the tune of “Happy Birthday” to make Trump’s birthday message to himself.

“At the White House, they had a little party for the president. They played ‘pin the blame on the press secretary,'” Kimmel said. “Melania jumped out of a cake and made a run for it. Vladimir Putin didn’t show up, but you know, he gave Trump his present back in November.”

James Corden joked that at Trump’s birthday celebration, he and his staff played “pin the bad economy on the Obama” and they “didn’t have to hire a clown.”

“Trump may have turned 70, but his views about women are 150 years old,” Corden joked (though Trump turned 71). “It must be tough to buy Trump a gift though. What do you get a man who hates everything?”

And on the Daily Show, Trevor Noah pondered a similar question as Corden: “The big question is, what do you get the man who grabs everything for himself?” 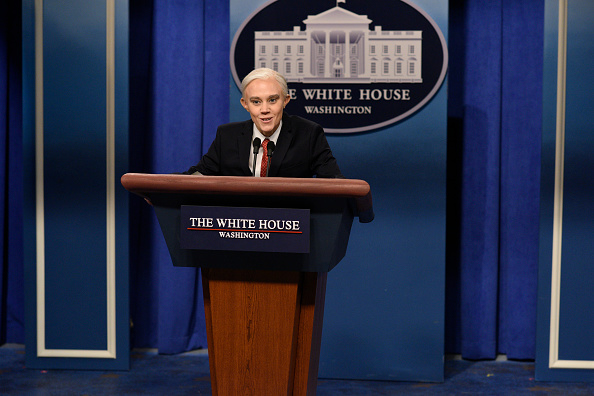 'Recuse Me.' Kate McKinnon Brought Back Her Jeff Sessions Impression to Hilariously Reenact His Senate Hearing
Next Up: Editor's Pick