Britain Stumbles Toward Exit Talks With a Reinvigorated Europe

Theresa May wanted a mandate for her vision of Brexit; voters didn’t give her one
Will Oliver—EPA
By Dan Stewart / London

It must have seemed like a good idea at the time. In April, British Prime Minister Theresa May called for a snap election in hopes of consolidating her power. Polls suggested that her Conservative Party would easily defeat the left-of-center Labour Party led by Jeremy Corbyn, an unreconstructed socialist estranged from many of his parliamentary colleagues. The vote, May said, would give the country the chance to unite behind her leadership as she guides the United Kingdom out of the European Union.

May’s gamble now looks like a grave political miscalculation. Far from gaining a mandate, the Conservatives lost their parliamentary majority in the June 8 election, in part thanks to a resurgent Corbyn’s attracting younger voters to the polls. Now no party commands enough seats to push through legislation on its own. Instead, May’s Tories must ally with a socially conservative party in Northern Ireland, the Democratic Unionist Party, to get anything passed. It’s a highly fragile base on which to build a government, and May is vulnerable to a leadership challenge if she falters.

What’s more, only days after the result, the weakened Prime Minister must begin the most daunting task a U.K. leader has faced in generations: forging a Brexit that will satisfy not only her fractured Parliament and divided country but also the 27 other E.U. member states. And she hasn’t much time to do it. May triggered the formal mechanism for leaving the E.U. in March, setting in motion a rigid two-year period of negotiations over the terms of withdrawal.

Those talks were due to begin on June 19, almost exactly a year after Britain voted to leave the E.U. Doing so will not be a simple task. Britain must first settle financial commitments already made to the bloc, worth perhaps as much as $112 billion, and clarify the future of 3 million E.U. citizens who currently reside in the U.K. as well as the 900,000 Britons living in the E.U. Once it has left, it can begin the knotty renegotiation of at least 759 trade treaties with 132 separate entities.

The election was framed as an opportunity to choose one of two ways to move forward. May’s Tories led the charge for a so-called hard Brexit, pulling Britain out of the E.U.’s single market completely so it could attempt to build new trade links with the world. The Labour Party and others advocated a soft Brexit, keeping trade and customs agreements intact. Crucially, a hard Brexit would allow the U.K. to control migration of E.U. citizens. Under a soft Brexit, those citizens might live and work freely in the U.K., much as they do now.

But voters had other things on their minds. An exit poll found that only 28% considered Brexit the election’s most important issue. Among Labour voters, the share was only 8%. Instead, the national debate centered on the role of the state in providing public services and, after the terrorist attacks in London and Manchester, national security.

Meanwhile, the E.U. looks only more focused and confident. Since the shock of Britain’s exit vote a year ago, it has been buoyed by the defeat of populist nationalists in the Netherlands and the election of the unabashedly pro-E.U. Emmanuel Macron as President of France. Then there’s the seeming indomitability of German Chancellor Angela Merkel. Polls suggest that Europe’s strongest champion will win a fourth term in September. The talk in Brussels is of closer integration over defense and security, not the threat of dissolution. Britain looks increasingly like an outlier when it comes to pulling out.

Yet that process is bound to continue, whether or not talks begin on June 19 and even if May is chucked out of 10 Downing Street. The U.K. will leave the bloc in April 2019 even if negotiations collapse–which would be the hardest Brexit of all. At that point, Britain could face steep tariffs on monthly exports of more than $15 billion to E.U. nations, unleashing what the Confederation for British Industry called a “Pandora’s box of economic consequences.”

There was talk, in the aftermath of the surprise 2016 referendum result, that E.U. negotiators might be especially hard on the U.K. as a warning to other member states that might be considering exits. But given the U.K.’s miserable experience even before talks begin, that might look like piling on. 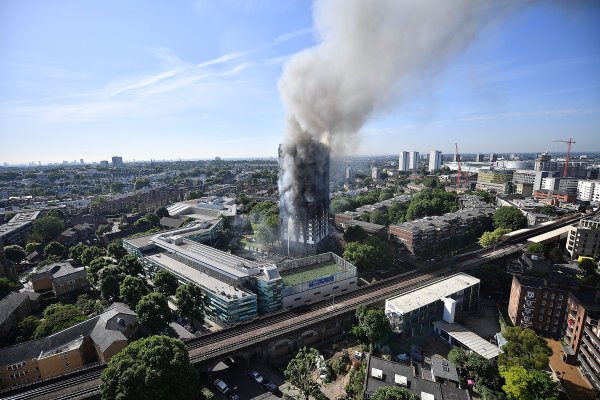 Deadly Blaze in London Tower Kills 30
Next Up: Editor's Pick