At first, John Patrick thought the loud banging noise that woke him up Wednesday morning was construction work — but after a few minutes, his wife assured him it was from a gun. He walked out his front door and just a few hundred feet away lay a motionless man.

It was only later that Patrick found out the man was Steve Scalise, the Republican House Majority Whip.

For residents of Del Ray, a small neighborhood in Alexandria, Va., James Hodgkinson’s shooting at a GOP baseball practice was horrifying.

“It’s crazy,” said Patrick, 40, who is owner of Rock of Ages Music, a music school nearby. “It’s absolutely nuts that this happened [here.] It’s a wonderful, tight-knit community.

“The people who move here and the people who live here just love it. It’s the kind of suburb near D.C. that you wouldn’t expect to be so close to D.C.”

The assault, which ended after Capitol Police officers shot and killed Hodgkinson, occurred at Eugene Simpson Stadium Park. The ball field is adjacent to a playground and dog park, and surrounded by homes.

Marion MacLean, a retired high school English teacher who also lives close to Simpson Stadium Park, was just as surprised by the attack as Patrick. The park and neighborhood, she says, are typically where kids play. “I was shocked,” said MacLean, 68, trembling. “I mean, my God, you don’t expect that in your own neighborhood. You really don’t. This is a very peaceful neighborhood. It’s [ironic]–we skew very Democratic. It’s really safe, protective. There’s a real feeling of community. Lots of very young children.”

As the chaos began to die down early Wednesday afternoon in Del Ray, the discussion among some residents turned to calls for increased gun control. Mark Levine, a representative for the district in the Virginia House of Delegates voiced his outrage over the state of Virginia’s inability to pass stricter gun control. “I decry the failure of Virginia to reasonably regulate gun sales to keep them away from dangerous people,” Levine said to TIME. “I don’t know why Republicans advocate for terrorists to have guns. This isn’t about logic it’s about emotion. It’s way too easy to get guns here.”

For others in Del Ray, however, Wednesday remains a day of prayer and reflection. On Wednesday evening, Christ Church in Alexandria will hold a prayer service for those injured in the Del Ray shooting. 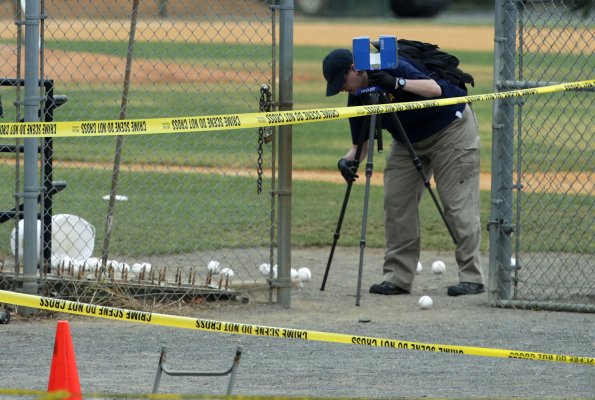 'Get Down!' Terrifying Video Shows Gun Battle at GOP Baseball Practice
Next Up: Editor's Pick