A male employee of J.P. Morgan Chase & Co is fighting the company’s paid parental leave policy, which he charges discriminates against fathers by offering more paid time off to mothers.

The American Civil Liberties Union, the ACLU of Ohio and employment law firm Outten & Golden LLP filed a sex-discrimation charge with the Equal Employment Opportunity Commission on Thursday morning on behalf of Derek Rotondo, a fraud investigator for the bank based in Columbus, Ohio. The complaint alleges that the policy, which provides 16 weeks of paid parental leave to the child’s “primary caregiver” and only two weeks of paid leave to the non-primary caregiver, discriminates against fathers. “This sex-based stereotyping violates federal and state law,” the claim says.

About three weeks before the June 6 birth of his second child, according to the claim, Rotondo inquired with the bank’s Disability Management Services about taking 16 weeks off. He was told that he was only eligible for two weeks off because he wasn’t the primary caregiver. He said that he would only be able to be given that status if he proved that his wife had returned to work before the end of 16 weeks or that she was “medically incapable” of caring for the child. Rotondo said the policy was affirmed by a representative from human resources, who wrote to him that the company automatically considers mothers to be the primary caretakers.

“It’s important for fathers to be able to bond with their children just as much as it is for mothers,” Rotondo said in an phone interview with Motto. “The biggest problem is the underlying assumption in the thinking behind the policy that childrearing is women’s work. We don’t live in the 1950s anymore.”

Rotondo ultimately took his two weeks of paid leave and plans to take an additional two to three weeks of unpaid leave provided under the Family and Medical Leave Act. But he said that he hopes his claim will compel his company and others to change their policies to be more accommodating to new fathers. “The banking industry as a whole is somewhat conservative and fairly old-school, and I think that has contributed to the hesitation — for lack of a better term — to modernize their policies,” he said.

The finance industry is still predominantly male. But in recent years, Wall Street institutions have begun to update their parental leave policies. In 2015, Credit Suisse announced that all new parents would be eligible for 20 weeks of paid parental leave, an increase from 12. In 2016, Bank of America followed suit, announcing that it would offer 16 weeks of paid time off for all parents.

“One of the arguments I think that we’ll see — and that we’ve seen in the past — is that the employer may say: ‘We have a very generous policy, we provide paid parental leave that isn’t required by federal law.’ The problem with that argument is that it misses the point that family benefits, including paid parental leave, have to be provided on equal terms,” Peter Romer-Friedman, an Outten & Golden civil rights attorney working on the case, told Motto. “We think this is a very clear cut case of sex discrimination and sex stereotyping.”

A spokesperson for J.P. Morgan Chase said in an email to Motto: “We’ve just received the complaint and are reviewing it.” 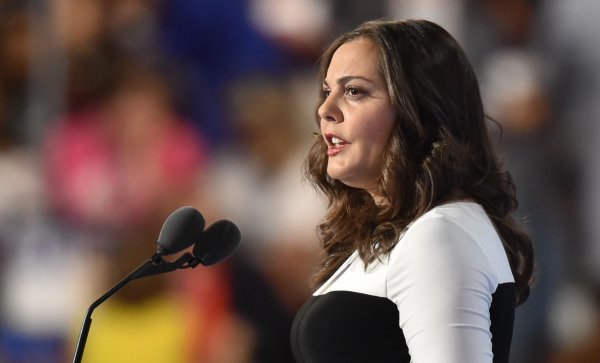 My Mother Died at Sandy Hook. Megyn Kelly Has ‘Profited Off My Pain’
Next Up: Editor's Pick