Corinne Olympios on Bachelor in Paradise Incident: 'This is My Worst Nightmare'

Corinne Olympios has broken her silence in the wake of the Bachelor in Paradise scandal.

“I am a victim and have spent the last week trying to make sense of what happened the June 4. Although I have little memory of that night, something bad obviously took place, which I understand is why production on the show has now been suspended and a producer on the show has filed a complaint against the production,” Olympios, 25, said a statement to PEOPLE via her rep on Wednesday.

“As a woman, this is my worst nightmare and it has now become my reality,” continued the reality star, whom PEOPLE previously opted not to identify as Olympios out of respect to the privacy of victims of alleged sexual assault.

“As I pursue the details and facts surrounding that night and the immediate days after, I have retained a group of professionals to ensure that what happened on June 4 comes to light and I can continue my life, including hiring an attorney to obtain justice and seeking therapy to begin dealing with the physical and emotional trauma stemming from that evening,” the statement concluded.

On Sunday, Warner Bros. released a statement announcing a that production had been suspended on the Bachelor/ette spinoff due to what the production company is calling a “misconduct.”

PEOPLE sources previously confirmed production was suspended after a producer raised concerns about an alleged sexual encounter between contestant DeMario Jackson, 30, and a female cast mate, both of whom had reportedly been drinking heavily all day.

Longtime host of the franchise Chris Harrison issued a statement regarding the incident on Tuesday, asking fans to “respect the privacy of the parties involved.”

“Let me start by saying the safety and care of the cast and crew of our show is of the utmost importance to us,” he said. “It is with this thought in mind that we made the decision to suspend filming. An investigation into the situation was started immediately. Warner Bros. is handling the details of that investigation. They’re moving quickly to gather all the facts, and once that’s done, a clear, concise decision can be made about where we go from here.”

“There are a lot of competing details in the various press accounts of the incident. And there’s a lot of misinformation out there too,” he added. “We urge everyone to be patient until the investigation is complete.”

As for the future of the series, a source told PEOPLE BiP will not be resuming this summer. “It’s just an internal investigation. There are no authorities involved, no law enforcement but the incident was flagged internally and they take these matters seriously,” added the source. 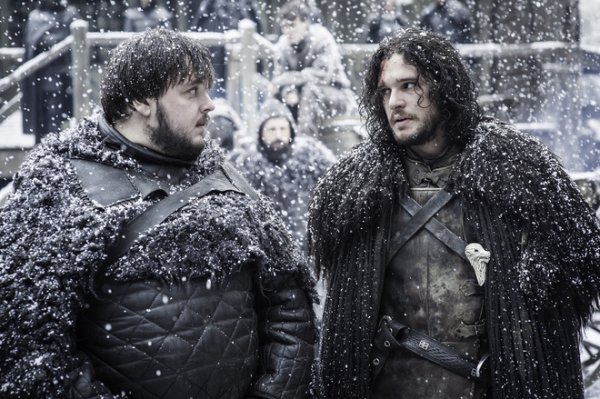 This Real Life Jon Snow-Sam Reunion May Offer a Clue About Game of Thrones Season 7
Next Up: Editor's Pick