Visitors to Capitol Stunned by Shooting

The plaza around the U.S. Capitol was closed briefly Wednesday morning in the wake of the shooting at a Congressional baseball practice in Virginia. Visitors stood around barriers at the plaza and waited in lines while security guards looked on.

Capitol Hill plaza was closed this morning as part of heightened security in the wake of a shooting at a morning Congressional baseball practice in Virginia. Visitors stood at the barriers around the plaza and queued outside while guards looked on.

“You can tell here’s sort of an atmosphere of tenseness, but that’s understandable,” said Jared Ropelato, a high school teacher visiting D.C. from California. “We sort of universally agree that seeing this is too important to let anything like that get in the way.”

By around 10 a.m., the plaza had been reopened.

Republican Rep. Phil Roe of Tennessee said that it was a moment of “soul-searching” for lawmakers and the nation at large.

“I think both sides of the aisle feel really terrible about this,” Roe said. He likened the violence to scenes of triage that he experienced during his time in the Army Medical Corps in Korea.

Roe also noted that Capitol Hill Police were only present at the scene of the shooting because House Majority Whip Steve Scalise was present. Without that additional security detail, Roe said, he believes the incident “would have been much worse.”

Some visitors said that heightened security at the hill was reassuring. Jean Treacy, who was at the Capitol chaperoning a group of eighth graders from Danvers, Mass., said that the shooting had prompted concern from parents back home and “valid questions” from students on the trip. 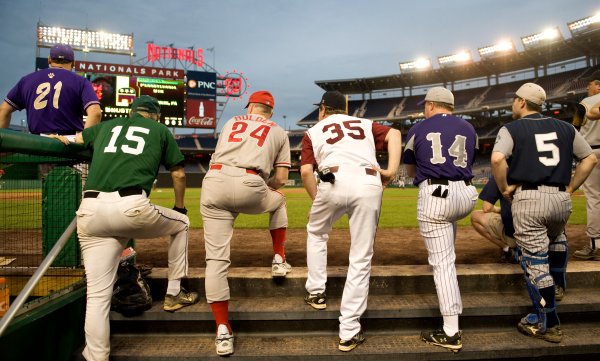 Lawmakers Were Shot at Practice for the Congressional Baseball Game. Here's the History Behind It
Next Up: Editor's Pick