Virginia Gov. Terry McAuliffe Says There Are 'Too Many Guns on The Street' After Scalise Shooting

Virginia Gov. Terry McAuliffe raised the issue of gun control during a news conference Wednesday, after five people were injured in an early-morning shooting at a baseball field in Alexandria where Republican lawmakers had been practicing for an annual charity game.

“Let me say this: I think we need to do more to protect all of our citizens. I have long advocated — this is not what today is about, but there are too many guns on the street,” the Democratic governor said, when asked if anything more needs to be done to protect politicians. “Background checks, shutting down gun show loopholes — that’s not for today’s discussion, but it’s not just about politicians. We worry about this every day for all of our citizens.”

The incident — which sent five people, including House Majority Whip Steve Scalise, to the hospital — began to spur questions about gun rights and gun control policies, while members of both parties condemned the violence and called for unity.

A House subcommittee had been scheduled to discuss a controversial proposal to ease regulations of gun silencers on Wednesday, but the hearing was cancelled in the wake of the shooting.

Asked if the incident had changed his stance on gun control, Alabama Republican Rep. Mo Brooks, who was at the baseball practice but was uninjured, told reporters he continues to support Second Amendment rights.

“As with any constitutional provision in the Bill of Rights, there are adverse aspects to each of those rights that we enjoy as people. And what we just saw here is one of the bad side effects of someone not exercising those rights properly,” Brooks said.

“I’m not changing my position on any of the rights we enjoy as Americans,” he added. “With respect to this particular shooter, I’d really like to know more about him — whether he was an ex-felon, by way of example, who should have had possession of a firearm — I’d like to know other things about his background before I pass judgment.” 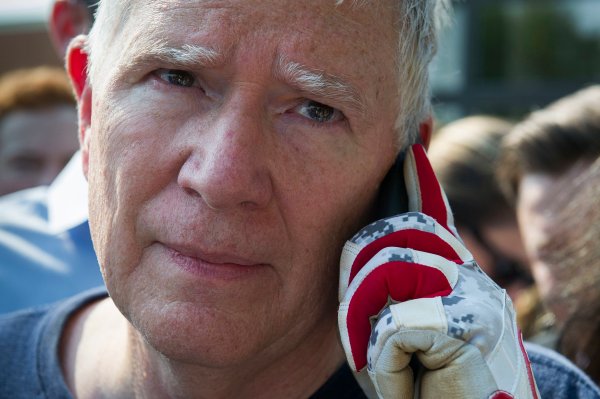 'Basically a Killing Field.' How the Congressional Baseball Shooting Unfolded
Next Up: Editor's Pick