The History Behind the Founding of the U.S. Capitol Police

Jan. 6, 2021, was a dark day in U.S. history, and in the history of the U.S. Capitol Police. A violent mob attacked the seat of the legislative branch and ran amok through its halls, breaking into offices—including House Speaker Nancy Pelosi’s—in one of the biggest security breaches in the U.S. Capitol’s history.

The Jan. 6 assault on the Capitol stands in stark contrast to the assault that prompted the founding of the U.S. Capitol Police force, which is charged with protecting Congress, amid the polarized political climate that was 1828.

At the time, “Jacksonian” politicians (supporters of Andrew Jackson, who had nearly become president in 1824) had secured a majority in Congress after the midterm elections. Sitting President John Quincy Adams could have expected he was going to have to fight Jackson for the White House in the upcoming 1828 presidential election — but he probably didn’t expect his son to get into an actual physical fight with a Jacksonian before Election Day.

Russell Jarvis, a journalist for a pro-Jackson newspaper The Washington Telegraph, attended a New Year’s Eve celebration at the White House with his wife and Boston relatives, when John Adams Jr., the president’s son and personal secretary, made what Jarvis later described as a “grievous insult to the ladies of my family.” Here’s how a book that chronicled the political and social scene in mid-19th century Washington, D.C., Perley’s Reminiscences of 60 Years in the National Metropolis, described the contretemps:

Jarvis is said to have been waiting for the right moment to seek revenge when he saw Adams in the Capitol Rotunda in April 1828. He said he asked the junior Adams if he would apologize, and when he didn’t, “I was excited by his continued refusal, and by a recollection of the offense, to commit an assault upon his person, which consisted merely in pulling his nose and slapping one side of his face, with my open hand,” Jarvis recalled, according to a personal account of the incident published in the newspaper Niles’ Register.

Jarvis’s actions have been described as “all standard and approved provocations for a duel,” according to the biography of presidential families America’s Royalty: All the Presidents’ Children, “however, John Quincy Adams’s disapproval for dueling was made evident when he responded for his son by sending a message to Congress…requesting that Congress provide funds to secure the way between the president’s office and Congress so that future incidents could be prevented.”

Congress passed the act creating the U.S. Capitol Police on May 2, 1828. 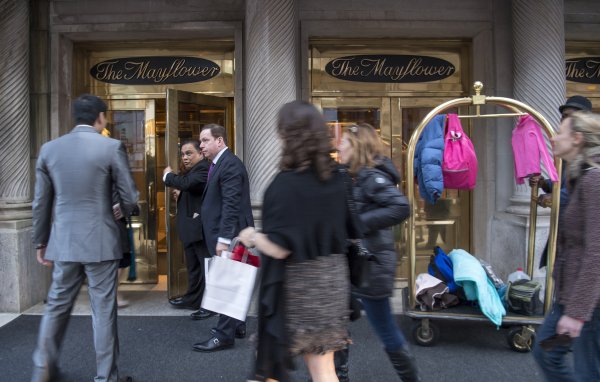 A History of the Mayflower Hotel in 5 Scandals
Next Up: Editor's Pick