Lawmakers Were Shot at Practice for the Congressional Baseball Game. Here's the History Behind It

The shootings at Republican practice for the Congressional Baseball Game on Wednesday marred one of Washington’s last great bipartisan traditions.

At a time of extreme political polarization, the annual event still attracts a friendly crowd of Capitol Hill staffers, lawmakers’ friends and family, and congressional reporters, who for one night turn the usual partisan fighting into a friendly competition to raise money for D.C. charities such as the Boys and Girls Club and the Washington Literacy Center.

In a 1948 speech on the House floor, Rep. James Richards of South Carolina paid tribute to the spirit of the game.

“Mister Speaker, in all seriousness, I want to say that it is a fine thing when two great parties of a great Nation, the greatest Nation on the face of the earth, can drop the care and worries of Capitol Hill, forget about the heat and temporary animosities of debate, and go out at night to a baseball field where the great American game is played,” he said. “It is a wonderful thing to get together and show the people of the United States that regardless of the fact that we sometimes differ on party matters, that after all we love our country and our flag, and like every boy in America, we love our great national game.”

In recent years, the event has been held at Nationals Park, home of the city’s Major League Baseball franchise, lending it an air of serious baseball. Lawmakers typically wear the jerseys of professional, minor league or high school teams from their areas.

The annual event was started in 1909 by Rep. John Tener of Pennsylvania, a former professional baseball player, and thus predates the ceremonial throwing out of the first pitch by the President, a tradition that didn’t start until a year later.

“The game was brewing for weeks and the Members of the House were keyed up a high pitch of enthusiasm,” wrote the Boston Daily Globe in an account of the first game. “Deep, dark rumors were in circulation that ‘ringers’ would be introduced, but when they lined up at 4 o’clock the nine Republicans were stalwart, grand old party men, while the Democrats were of the pure Jeffersonian strain.”

An Irish immigrant, Tener had been signed as a pitcher by the Chicago White Stockings in 1888 and played professionally for four years. He served a single term in Congress before running for governor of Pennsylvania, where he was known as “der ball spieler” — the ball player — in the state’s Pennsylvania Dutch area. After serving as governor, he became president of the National League.

UNITED STATES - JUNE 13: Rep. Bill Johnson, R-Ohio, puts on catcher's gear during a scrimmage between Republican team members at the Washington Nationals Youth Baseball Academy in Anacostia, June 13, 2016.
Tom Williams—CQ-Roll Call,Inc.
Silvio O. Conte, R-Mass., with a cigar clamped in his teeth and his recently discarded crutches below him, lines up to take a Democrat team pitch at the 1966 Congressional Baseball game.
Mickey Senko—Getty Images

The game has not been played every year. It was canceled during the Great Depression, World War II and occasional periods of pique by House leaders who felt it was interfering with legislative business, but it was revived in 1962 with the backing of Capitol Hill paper Roll Call.

Female lawmakers first joined the game in 1993, when then-Reps. Maria Cantwell, Blanche Lambert and Ileana Ros-Lehtinen played. Cantwell, who was walked in the third inning and became the first female lawmaker to get on base in a congressional game, wore a Seattle Mariners jersey and shorts because “the team didn’t have any pants that were small enough.”

The shootings may have disrupted this year’s event, but the game’s spirit is one of perseverance—as then-Sen. Tom Daschle noted when speaking about the Democratic loss on the Senate floor in 2002.

“Mr. President, I am sorry the Republican leader had to bring up the score of the game last night,” he said. “He could have quietly and graciously noted that the Republicans won, but it is his right to notice publicly that we got trounced last night. But there is another day. I graciously admit defeat in this case. … But there is another day, another game, and we are going to try to level the playing field next year. In the meantime, we will try to do the best we can to win our victories on the Senate floor.” 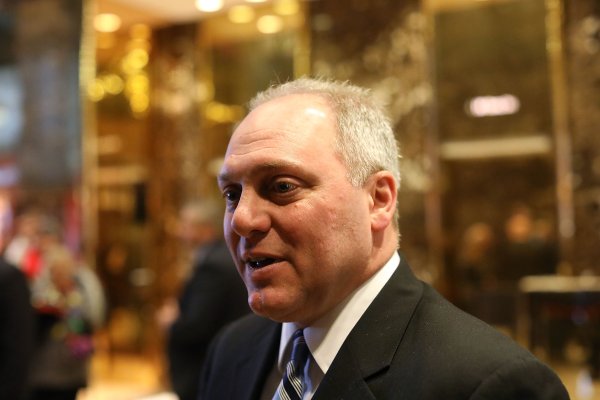 Congressman Steve Scalise Was Shot. Here's Everything You Need to Know About Him
Next Up: Editor's Pick