Steve Scalise Was Shot at a Congressional Baseball Practice. Here's What You Need to Know

Multiple people were shot, including House Majority Whip Steve Scalise, while Republican lawmakers were practicing for a congressional baseball game at a Virginia field on Wednesday, officials said. A suspect was taken into custody and later died, President Donald Trump said. A total of five victims were taken to hospitals, according to police.

Here’s what to know about the shooting.

Gunfire erupted at a baseball field in Eugene Simpson Stadium Park in Alexandria, Va., where Republican Congress members were practicing for an annual charity game, according to police and witnesses.

Five people were taken to the hospital with gunshot wounds, including Scalise and the shooter, according to the FBI. Scalise was hit in the hip and is undergoing surgery at MedStar Washington Hospital Center, his office said in a statement. MedStar said Wednesday afternoon Scalise was “critically injured” and is in “critical condition,” although his office had said hours earlier that he was in stable condition.

The congressman remains in critical condition as of late Wednesday, and will need several more surgeries, according to MedStar. The hospital said Scalise was hit by a single shot in the left hip, after which “the bullet traveled across his pelvis, fracturing bones, injuring internal organs and causing severe bleeding.”

The 51-year-old Louisiana lawmaker is the No. 3 House Republican leader and was elected to the House in 2008.

The other three people transported to the hospital with gunshot wounds were Special Agent Crystal Griner, a U.S. Capitol police officer, Zack Barth, a congressional staffer for Rep. Roger Williams, and Matt Mika, a lobbyist for Tyson Foods and the company’s government relations director.

Mika’s family, en route to Washington D.C. on Wednesday afternoon, said he had been shot multiple times in the attack and had surgery, but will likely remain in the intensive care unit for several days.

Alexandria Police Chief Michael Brown said at a news conference earlier in the day that five people had been taken to the hospital. Brown declined to release their identities and conditions at the time.

In addition to the five injured, Williams said he sustained a minor injury. Another U.S. Capitol Police Officer, Special Agent David Bailey, was hospitalized for minor injuries but has been released.

The suspected gunman has been identified by the FBI as James Hodgkinson, of Illinois. Trump said at a news conference that the suspect has died from his injuries, which the FBI later confirmed.

Hodgkinson was taken into custody after exchanging gunfire with law enforcement, Brown said. Alabama Republican Rep. Mo Brooks told CNN he “never heard the shooter utter a word.” Rep. Ron DeSantis told Fox Business’ Neil Cavuto that he and Rep. Jeff Duncan were leaving the field early Wednesday, shortly before the shots broke out, when a man approached their car and asked if the people practicing on the field were Republicans or Democrats. They responded that it was the former, DeSantis said, and the man, who he said is confident was Hodgkinson, began walking towards the field.

Tim Slater, the FBI special agent in charge of the Washington, D.C. field office, declined to comment on whether Hodgkinson had a “vendetta” against Republicans.

The FBI is investigating Hodgkinson and his motives, and told reporters he had been living in Alexandria out of his vehicle since March.

How did officials in Washington react?

On Wednesday evening, Trump paid a visit to Scalise at the MedStar Washington Hospital Center, where he was being treated for his injuries. Trump and First Lady Melania Trump bought two bouquets of white flowers to the hospital, according to the Associated Press.

Trump described Scalise as being “in very tough shape” in a tweet after his visit, calling the congressman “a real fighter.” White House Press Secretary Sean Spicer described the visit, during which Trump sat by Scalise’s bedside, as “emotional,” the AP reports.

Earlier, Trump had written on Twitter that Scalise “was badly injured but will fully recover.” Trump called Scalise a “true friend and patriot.” The President also issued a statement, saying he and Vice President Mike Pence were “deeply saddened by this tragedy.”

“Our thoughts and prayers are with him,” Trump tweeted.

Why were the lawmakers playing baseball?

The lawmakers were practicing for the Congressional Baseball Game. The game, which is set for Thursday, is an annual partisan tradition that dates to 1909. It pits Democratic House members against Republican House Members in a friendly game that raises money for charity.

Thursday’s game will go on as scheduled, the Congressional Baseball Game for Charity said Wednesday. 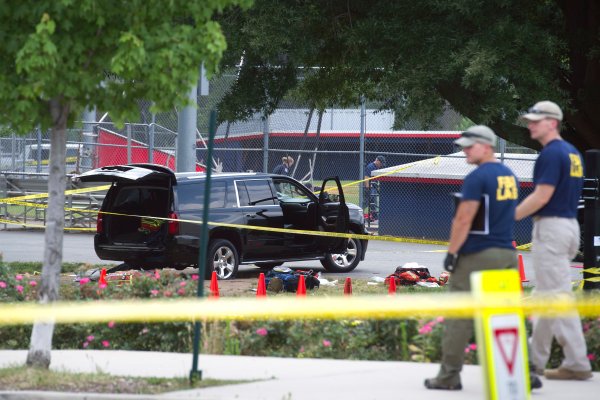